A family of volcanoes 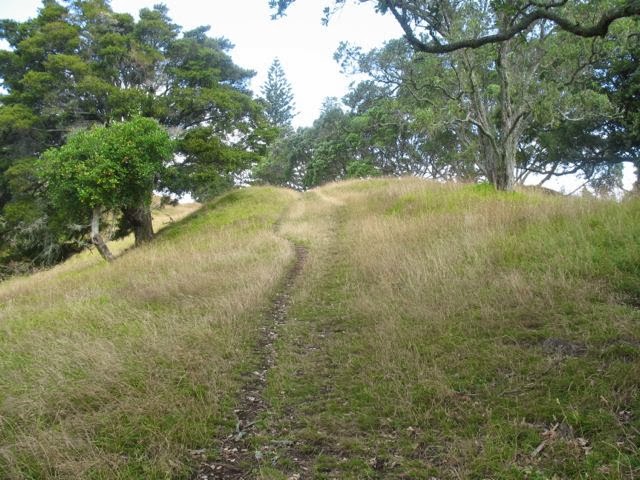 After climbing a steep flight of steps, we came to the crater. I love a natural pathway, especially a wavy one like this, with twists and turns. While waiting for Auckland's summer to arrive, I've found that the beaches are not the place to be. Nearly every day is windy and cool. It's almost the end of January and the first swim still hasn't happened!  High on this volcanic cone, hidden in a leafy suburb of Auckland, the wind was so fierce that I wished I'd put rocks in my pockets. 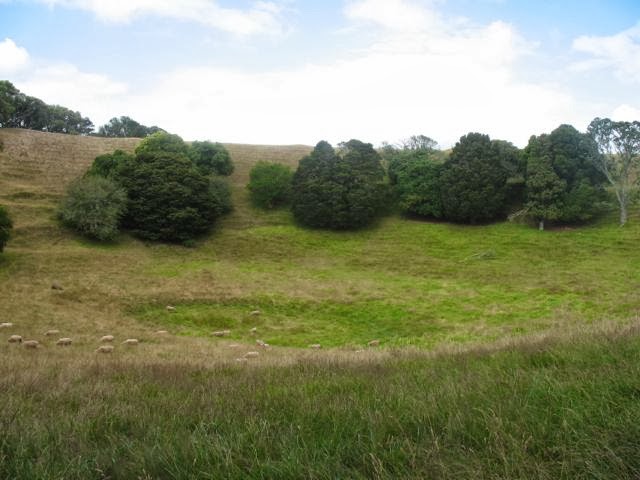 The photo doesn't really show the steepness of the slopes down to the bottom of the crater. All around the ridge we found depressions in the ground, where there were once kumara pits. For this was a pa site (fortified village), and much of the terracing is still visible. You might get a sense of the perspective by seeing how small the sheep are down the bottom. The cone is called Te Kopuke. 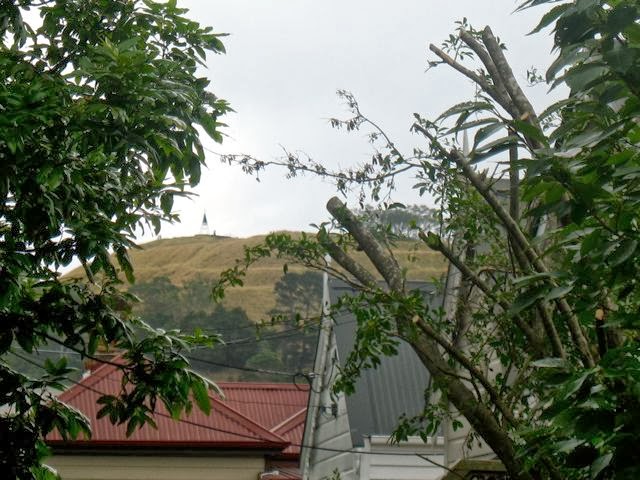 On the way to Te Kopuke I looked back, and saw the well-known cone of Maungawhau, the mountain of the 'whau' plant. Each summer I used to sit in Mt Eden village with other artists, under a big banner proclaiming 'Artists in Eden'. We would paint or draw the mountain, and then give our works to be auctioned on the spot, to raise money to help young artists. I used to walk up this mountain frequently. 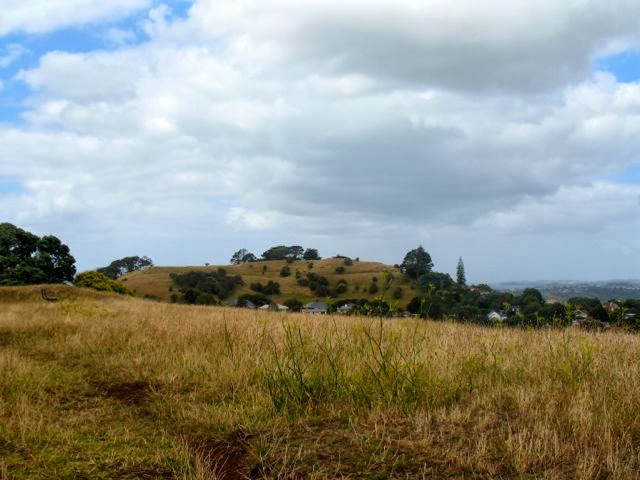 But - back to Te Kopuke, the path turned a corner, and there in front of us was another well-loved cone: Remu-wera, a fine mountain that lies to the east. 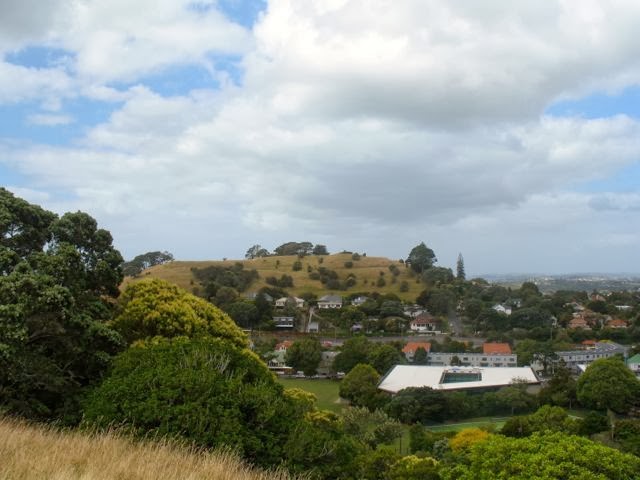 When I was doing my training in psychosynthesis psychotherapy, we students used to climb Remu-wera during the lunch break, to release and replenish. 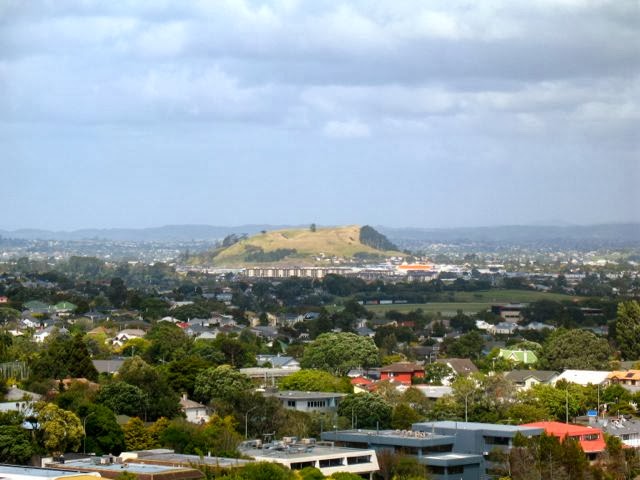 Far in the distance, to the south, we could see Maungarei, a cone which has been quarried in the past. From this perspective, the cut line is clear. The other large cone, which I haven't photographed, is Maungakiekie, the one to which I have taken many visitors on their way from the airport to their lodgings.
From every one of these extinct cones, we get a view of the others. Te Kopuke is well situated for viewing. It reminds me of Auckland's history, and the family of volcanoes on which we perch. We are assured that they are 'not expected to erupt again', and so we have settled this once-fiery peninsula, trusting that it will stay cool and stable. 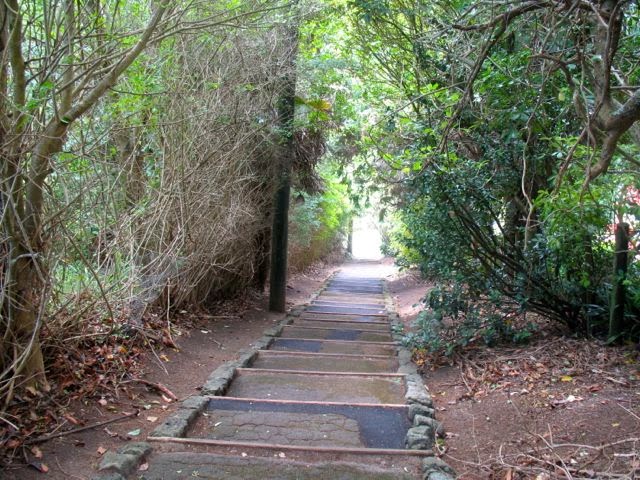 Descending the steps after circling the crater, I could feel the wind subsiding. It certainly blew away all the cobwebs, and I felt happy to have explored this hidden gem.

I love seeing these pictures, especially the one time pa. Such a sense of time passing...

That was a lovely walk thank you Juliet. Auckland / Tamaki Makaurau is such a beautiful city.

* Vicki, yes I was musing on the passing of time also as I did this walk.

* Joan, so glad you enjoyed it. Even a small walk can feel like a pilgrimage!

I think this is the one I know as Mt St John? (But the indigenous names are preferable.) When I attended the neighbouring school at intermediate level, it was the main part of our hellish cross country run. I love it now, however, and it is one of the quietest, most peaceful places I know above the city hubbub.

*Claire, that's the one. I can imagine it would have made a demanding cross-country segment for you. I was amazed at how peaceful it is there. The energies are marvellous. How nice that you know it so well.

I don't know Auckland well, at all, so this was an enjoyable guided walk for me. We have had lots of wind here too.

A very interesting walk through time, from pre-history to today. Via a detour to college!

I love the idea of stones in ones pocket to stop one getting blown away.

I loved your walk and your commentary. What came to mind was the study of ley lines. Do you know much about ley lines and how to find them?

* silkannthreades, glad you enjoyed the walk. At least the wind keeps us cool.

* Friko, I had another windy walk last night and thought of the stones again!

* Linda, I've known people who were very good at dowsing for ley lines. Some of the volcanic cones have very strong energies.

Thank you, silkannthreades, Friko and Linda, nice to take you walking!

You certainly do get a sense of perspective when you see how small those ship are on the hill. Lovely images. Sorry to hear your summer is so late in arriving. It's been quite lovely here although probably not as hot as other summers xx

* Charlie, yes the views are great from this perspective. The wind is blowing away the warmth still, but nice to have a cooler summer too.

I loved this walk with you, Juliet, and learned so much from it. How interesting these cones are; something I knew nothing about until now. You live and wander about in such a paradise, Juliet. Thank you for sharing it.

* Penny, it is a paradise, and we are very lucky. Auckland has such a rich and varied natural environment. I'm planning to walk more of the cones in due course. Thank you for joining in (and isn't it nice to find each other on line at the same time?- I've just been visiting you)

I received by email this comment from Celi of http://thekitchensgarden.com
She is frustrated because she only gets part of my comments box and for a while has not been able to post. So I'm posting her comment for her. She says:

'Todays walk was just lovely. NZ has the strangest summers, I can remember having fires on christmas day and things warming up when we went back to school. When we lived up north with children I would take them to the beach the minute we finished breakfast and before their morning nap, by 9am it was usually raining!

It is good to remember that the big sprawling mess that is ack is right around a number of dormant volcanoes. This is one of the reasons this recent spate of earthquakes bothers me, I do not want these bad boys woken up.

Oh and what a delightful walk to take after hours of travel in a plane.. I must remember that.'

* Celi, thank you for your comment. We are always assured that the volcanoes are safe, and that Auckland is not on an earthquake line. All the same, when one part of the country rumbles, we are all on the alert.

I, too enjoyed a virtual walk with you Juliet. Walking on the flat is my lot for now as my knee strengthens after the minor surgery late last year.
Years ago my uncle took my family up Mt Wellington( I am ashamed to say I do not know it's Maori name) The children loved romping down the steep sides into the crater and wondering about the kumara pits and the sheep tracks.
Wonderful vistas from these steep hills but "gusty over the tops" as they say on the weather forecasts.

Lynley, strong knees are definitely required for this kind of walk. Mt Wellington's Maori name is Maungarei, and appears in my last photo of the cones.
Thanks for visiting, and I hope your knee heals well.

Thanks Juliet. I am really enjoying walking with you via the internet.

Hi Juliet - I'm way behind .. but these are lovely .. and great to see .. cheers Hilary

Hilary, thank you and nice to see you catching up.