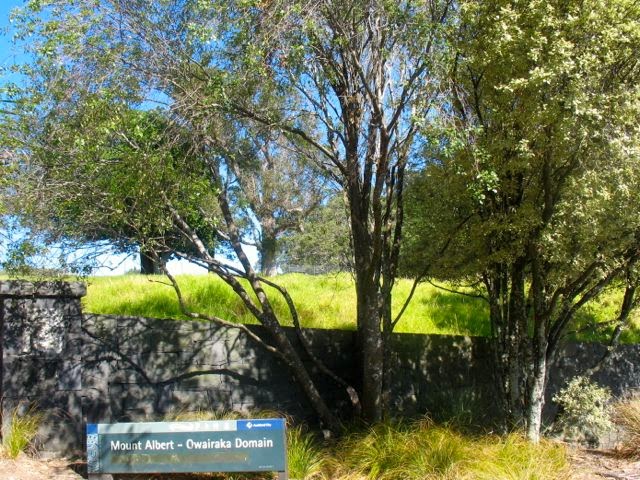 Last week my friend and I were ready to walk up one of the other volcanic cones: Mt Albert/Owairaka, the dwelling place of Wairaka. And who was Wairaka? 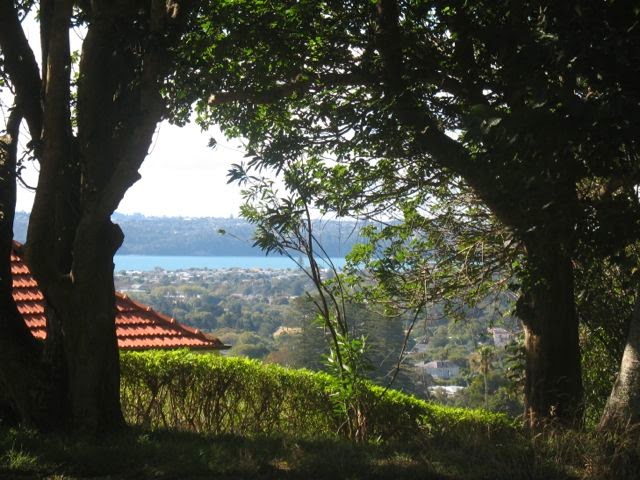 Wairaka was a chief's daughter who became renowned for her bravery. After the arrival of the tribe's waka (canoe) in Aotearoa/NZ, the waka broke its moorings. Wairaka seized a paddle, crying out 'Let me act like a man!' , encouraging the others to paddle also, and saved the waka.
From the lower slopes of Owairaka we could see the Waitemata harbour to the north. 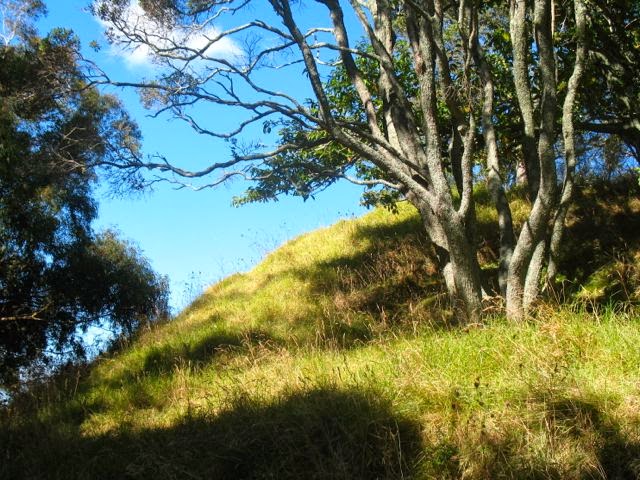 It wasn't long before we began to climb, 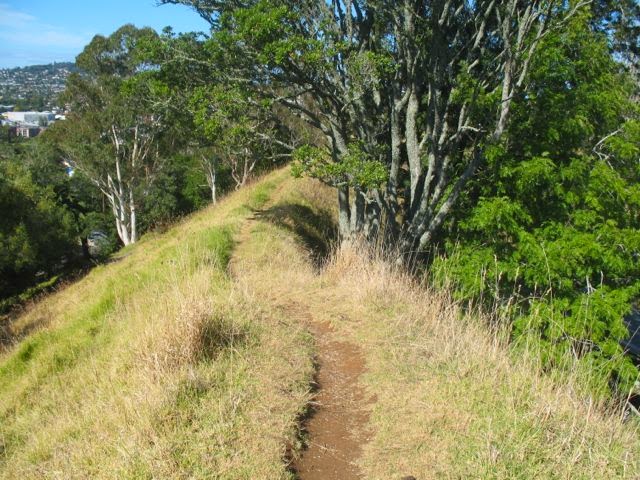 turning our backs on the road to the summit and taking the pathways that wound around the slopes. 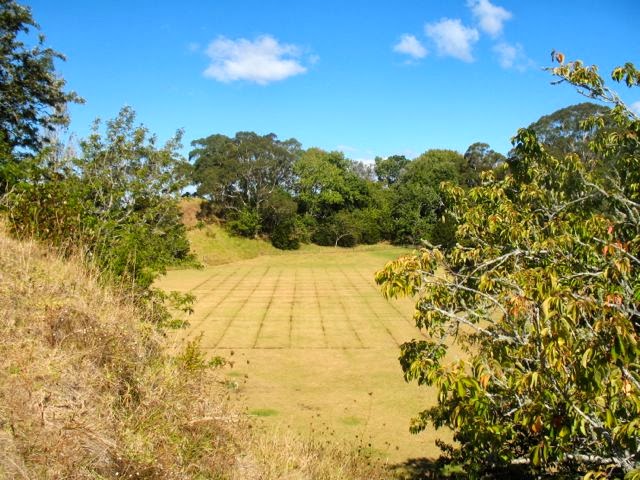 And here at the top, I felt sad. There is no deep crater at the top. There is no beautiful cone. Nothing but a flat field, which is marked in a grid for archery practice. 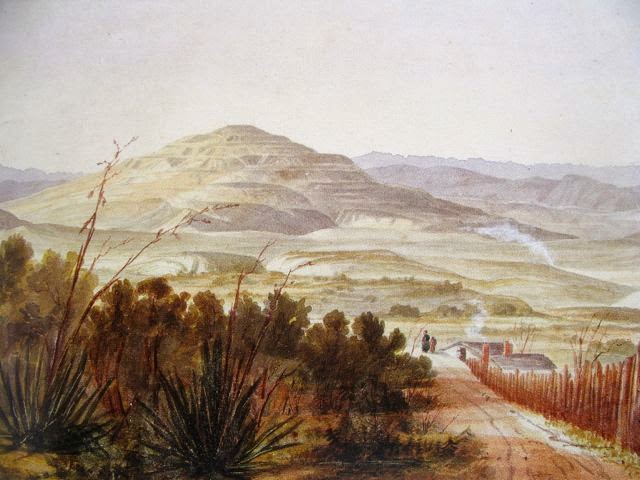 I already knew what Owairaka once looked like, for its beauty was captured in this watercolour by John Mitford, painted in 1845.
But in the 1890s NZ Railways ran a line to the base of the mountain. They built a tramway up the slopes and began to quarry away the scoria from the top. Did Wairaka, the ancestor, turn in her grave? Did she curse and cry?
If she did, it made no difference. 15 metres (nearly 50 feet) were carved off the top of the mountain, and the result is a sad flatness. The scoria was used to construct railways and roads, including the north-western motorway along which I drive to the bach. Eventually, after decades of protest, the quarrying was stopped. 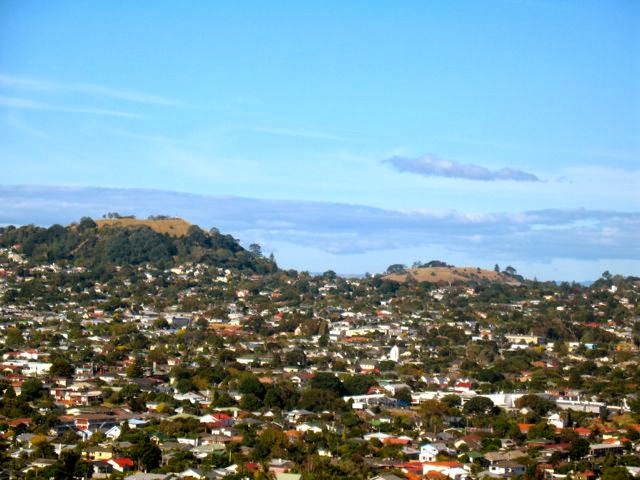 Even so, from the upper slopes we had some fine views: out to Maungawhai (Mt Eden), Ohinerangi (Mt Hobson), and Te Kopuke (Mt St John), all of which you and I have visited in previous posts. 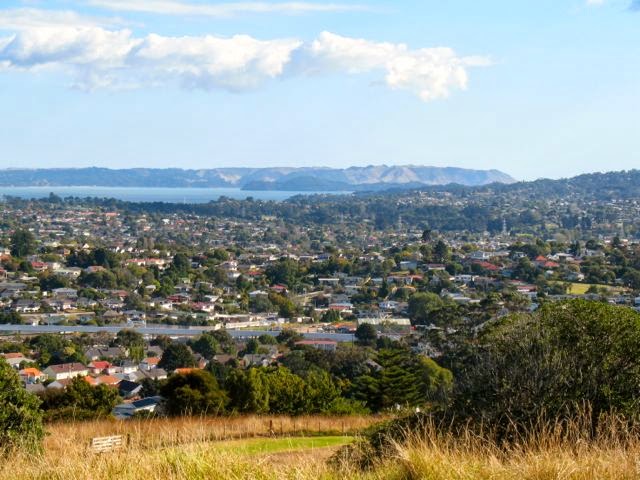 And on the south side, out to Auckland's other harbour, to the Manukau Heads (on the right, across the water). 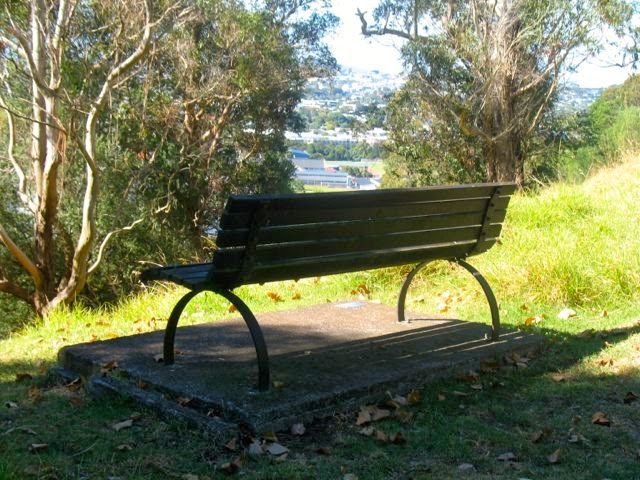 Walking the cones. Each cone is different, and each cone gives a different perspective on the others. Each visit prompts reflection.
And so I sit, musing on the free-draining scoria that makes my drive to the bach smooth under the tarseal of the motorway; musing on the lost cone.
Musing on the tension between the demands of modern transport needs, and the need to conserve our precious heritage.
And musing on Wairaka, whose heroic action has been forever remembered by her descendants and by those who visit Owairaka.
Posted by Juliet at 3:58 PM

I am enjoying learning more about Auckland. After the recent floods in Christchurch there has been vigorous debate in the newspapers about how in our desire to return waterways to their natural state we have ignored the usefulness of artificial drainage systems that were once cared for by Catchment Boards. It is a difficult balancing act.

Gallivanta, how nice to see you, and how interesting to hear of that debate in Christchurch. There are no easy answers it seems. Thank you.

Hi Juliet - interesting that you know Waikara's history .. and how sad that the cone was destroyed ... but at least it is fertile now, even if flat. Archery is an old art - so it's good it's not being lost ..

But I can hear your heart wring as you wonder what the souls of the past would be feeling ... they are all around aren't they ...

Loved the photos and your thoughts - cheers Hilary

That sadness rises to the north, Juliet, for I feel it as well, in the many ways mankind has destroyed for progress, much of which I use as well.

Your photos are beautiful. I'm especially drawn to the simple path upward.

I love your photos...you bring it real to me. There really no easy answer to so many things!

* Hilary, you are right about the archery. Yes, my heart did wring, as you say.

* Penny, progress and conservation: what a tension it is. I love that single path too, though my feet had to watch the ground rather carefully.

* Linda, no easy answers. You are so right.

Thank you Hilary, Penny and Linda. I am not able to post so often right now, and it's good to feel you with me.

Man is the greatest natural disaster of all -- destroying so much beauty so that we may live in ever greater comfort. Here in the states many of us fight against coal mining done by 'mountain top removal' -- and clear cut logging which destroys forests -- and dams on wild rivers...And much of our fighting is done on line, using the electricity produced by these very things we rail against. A difficult balancing act, indeed.

Vicki, thank you for your comments. These acts of exploitation have such far-reaching implications, and yet as you say, it's a complex issue because we benefit from the very things that we rail against.

This is such a lovely series, Juliet - makes me want to walk them myself ( but I won't...)

Thank you Anne, I'm really enjoying exploring the cones, and as long as the weather holds, I'll continue. It's fun planning each one, and looking back on the ones I've already walked, from each new summit.

I didn't realise Auckland has so many hills. The painting is lovely. I'm glad they finally stopped the quarrying xx

I so enjoyed this walk because we lived at the foot of Mt Albert and I can remember going on a school trip from Edendale School up there over 60 years ago! I remember seeing a scoria cut in the mount and also a water reservoir. Your view from the top must include our lovely old wooden house somewhere at the foot. One of the fun things was coming down Euston Road - incredibly steep - on the bike from Mt Albert Road and being able to freewheel all the way home to Haverstock Road (which in those days was a dead end with paddocks going right over to Mt Albert Boys.) Happy days!

Anne, what marvellous memories you have! I didn't realise you were so close to the mountain, or that there was so much open country in those days. Thank you so much of adding this perspective.

Charlie, I love that painting too, even though it seems quite faded. Auckland's hills are so surrounded with houses that it's easy not to overlook them. Thanks for visiting.

I have not walked along all these pathways before. I am so grateful when you take us along. Wonderful. Though my flat land muscles would have been crying by the time I got to the top with you. Auckland has gotton very big. I hate quarrying. I know it is a fact of life but I hate it. Have a gorgeous day.. c

Celi, what a nice surprise! You are able to post again, and that's great. Yes, I bet your muscles would feel the strain of going up hill after living on the plains. I'm so glad you have been able to come walking with me to some high places. Thanks.