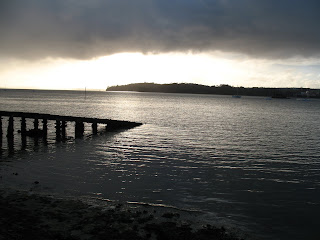 Winter draws me back behind its veil. I've been tripping about, exclaiming at signs of spring, but not today. One step forward, one step back is the transition dance right now. I draw back from driving through the traffic to yoga, and instead wander down to the jetty to sit.  It's late afternoon. I can feel the day dropping away. Gently, the incoming tide laps against the rocks.
The scene is luminous, yet without colour, and my mind slips into stillness, into liquid silver. One definition of yoga is the stilling of the mind. Here as I sit, I am in yoga.
Posted by Juliet at 5:38 PM 5 comments: 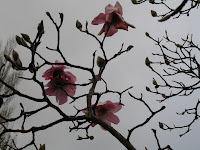 Walking in the rain again, having told myself before I set out that I'll be glad I made the effort. It's late afternoon and the grey day has begun to bite. But I'm looking for signs of spring these days, and what should I find but a glorious magnolia tree! Its blossoms are sumptuous and elegant, reaching up into the grey sky from bare branches. I feel I'm looking into a Japanese painting.
Blossoms without leaves, that's what my new visions are like. I'm full of buds of promise, but the energy is not yet sufficient for growth. 'Be patient,' I tell myself. I find I'm starting sentences with 'when spring comes'. Meanwhile, the magnolia makes me glad.
Posted by Juliet at 5:08 PM 2 comments: 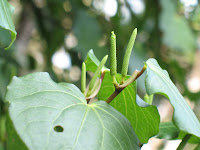 Kawakawa is coming into flower, putting up its little green candles. Underneath, jonquils stand tall, breathing out heavenly fragrance. Snowdrops are displaying their little white skirts.
I perk up. I am starting to believe in spring. 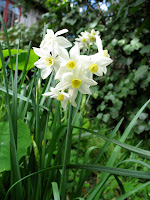 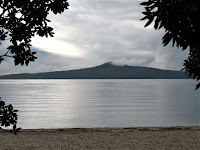 Even on a grey wintry day, subtle shimmers of light break through the clouds. I drove to the dentist, feeling a little wan, and who should I discover in the waiting room but an old friend. I had just connected with her on 'Linked In' the day before! After a warm hug, I felt that the sun had come out.
On the way home I stopped to admire Rangitoto in the winter light, over a stretch of glimmering water. Beauty is everywhere, even when we least expect it.
Posted by Juliet at 7:16 PM 3 comments:

Faces in the flames 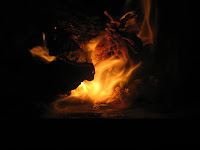 The wood fire brings such good cheer to the bach as heavy rain drums on the roof. The walls warm up and the whole room turns toasty. When I tried photographing the flames, to my surprise, many of the photos displayed faces. I remember as a child seeing faces and dancing figures in our old open fire in Taranaki. The first story I ever published (in the school journal) was about an old woman gazing into a fire and seeing her whole life playing out there. Now I am gradually becoming the old woman, and the faces have appeared.
Posted by Juliet at 8:09 PM 4 comments: 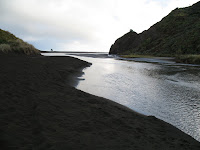 Serious rain began to fall as I left town, but sometimes it’s best to confront the weather and not hide from it. Out at the bach, I stepped out undaunted under my big umbrella, into the rain. After about ten minutes, a sudden sun break delivered sparkling beauty and wonder: the catch of blue from the wings of a heron as it flapped wetly upstream; the contrast of silver marram and deep gold pingao against the black sand; a blue-headed chaffinch flashing a red breast; and through it all the thin winter light that sheds magic over a well-known landscape. 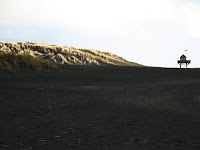 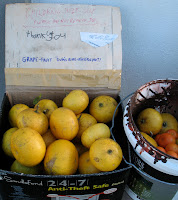 As I walked down the road towards home, I stopped in front of an old house. There on the street someone had placed a box of grapefruit fresh from the tree - free for the taking. I took one and put it in my pocket, feeling I was carrying the sun.
What a bright winter gift! When I returned to take a photo, an old man was kneeling in front of a bucket of mandarins, writing another sign. He's been living in the neighbourhood for 45 years, and apologised that this year the mandarins are a little small.
Sharing our bounty: it's a co-operative impulse that warms the bonds between neighbours and citizens. As the Japanese proverb says, 'One kind word can warm three winter months.'
Posted by Juliet at 3:54 PM 2 comments:

I returned home after a day's meditation retreat, just on evening. The sky and sea had turned an intense pink, contrasting with the green that was still held in the nearby trees. Such serene beauty in the outer world! It matched perfectly where I had been in the inner world during the day.
Posted by Juliet at 6:46 PM 2 comments:

Out of the box 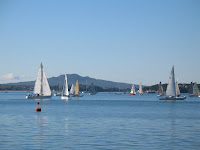 After much dreary rain, Auckland is sparkling. I walked along the waterfront with my friend, while yachts appeared from nowhere, tilting and gliding, waiting for wind. The air is still and the sun warm.
It's one 'out of the box', as the saying goes, and today is indeed like a present freshly unwrapped, full of delight. Earlier in the week, this day was curled up in its box, wrapped around with grey cloud and wind, lost in slumber. And now it's out, free to dance.
These contrasts wake me up. I feel energised, wanting to skip and shout, suddenly believing in spring.
Posted by Juliet at 3:18 PM 2 comments: 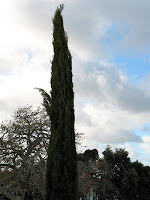 Each tree blows differently in the easterly. The flame tree shivers its twiggy cage while the trunk remains unmoved. The pohutukawas heave their bushy heads, tossing to and fro as if wanting to break free. The cypress is a slender woman pulling her shawl in more tightly as she bends in the blasts, nodding her head emphatically.
In the foreground the jade plant sits in full flower, unmoved.
In the background clouds drift, sailing across my view with dignity and certainty, grandly making their way to somewhere.
I am a still watcher, safe and warm on this wintry day.
Posted by Juliet at 3:07 PM 2 comments: 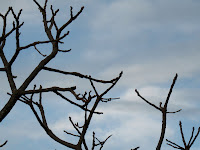 I see that the path I was about to take is not the way to go; the path I was refusing is where I need to answer the call.
Posted by Juliet at 3:25 PM 3 comments:

Walking in the sun rain

I nearly turned back. I had no umbrella, and rain began to fall just as I'd started my afternoon walk. But sometimes it's good to be intrepid, especially in winter; not to be deterred by a bit of wet or wind. And the rain wasn't heavy. I decided to take a chance.
I'm so glad I did, because an unusual thing happened. As I walked along the waterfront, gazing over the slate blue sea, I noticed that although it was raining, I wasn't getting wet! The sun was out too, and it was drying the rain even as it fell. I was walking in the sun rain.
Then as I turned my head in the opposite direction, there against a backdrop of voluminous grey cloud, rose the base of a rainbow. In a few moments it arched higher, making a perfect curve. A few moments later and a second, fainter rainbow appeared above it.
I stood in wonder, stunned by the beauty that nature can produce, all in an instant.
This was a day of treading the edge of magic, between wet and dry, grey and luminousity, rain and sun.
I'm reminded, yet again, that going out to meet the weather so often brings an unexpected gift.
Posted by Juliet at 10:37 AM 2 comments: