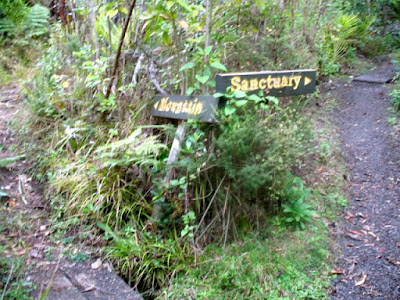 I've just spent a weekend at the beautiful Mana Retreat on the Coromandel Peninsula, where I led a winter solstice ritual for the community and helpers who had gathered for a big working bee. On Sunday I had time for replenishment. At Mana, there are many choices. On this day I felt fit, and as the mist cleared, I decided to walk up the mountain. 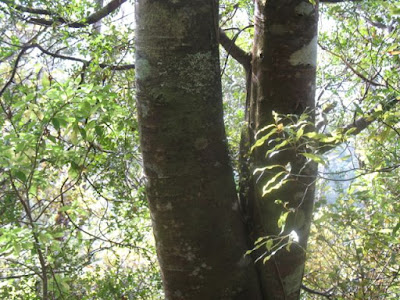 In the still rhythm of walking, I could hear the mountain guiding me. 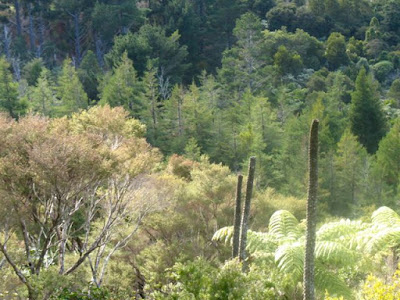 'Take a staff,' it said. 'This will steady you.'
I had forgotten to pick one up from the big basket as I left, so I needed to search amongst the trees. The mountain had a staff ready and waiting (not one of the soft punga trunks in this photo, but a tough kanuka pole), 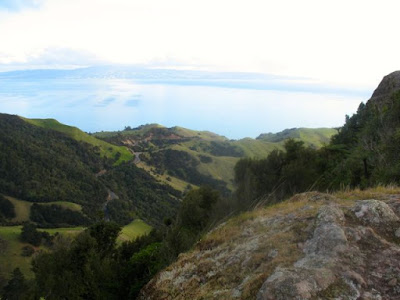 and it was true, the staff gave me steadiness as the path ascended steeply and at times it was hard to find a foothold. 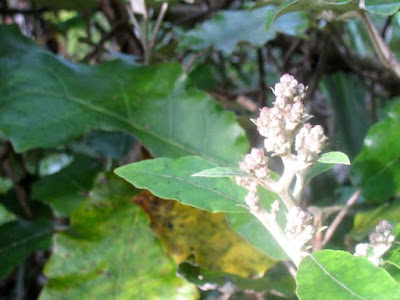 'Pause to notice what's here', said the mountain. Native flowers are quiet, not flamboyant. They are mostly white, because of being pollinated by moths at night. I paused, and discovered rangiora about to burst into flower. 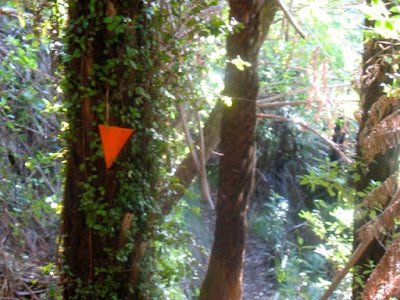 'You will be supported,' said the mountain, and so I was, with a sign just as I was feeling lost, or a foothold cut into a steep part, when I was faltering. 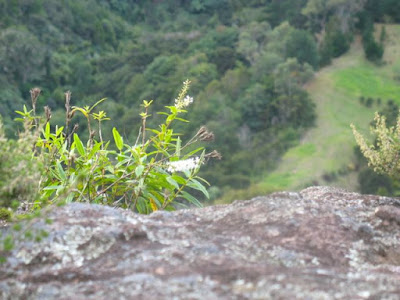 'And when you think you have reached the top, know that it is not really the top. 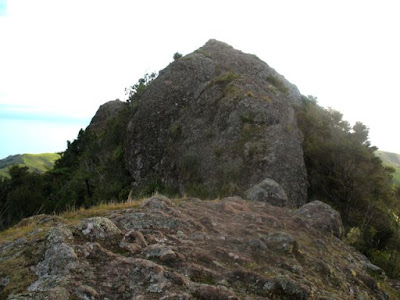 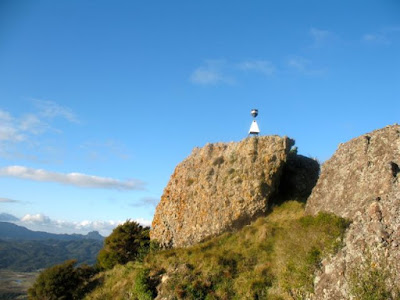 'Now is the time to stop and rest.' 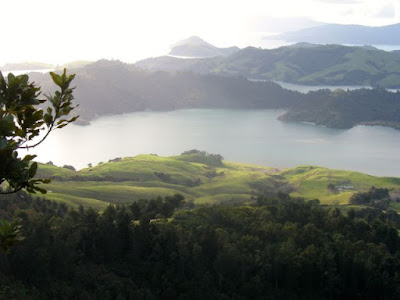 'Lifted high above dwellings and roads,  bushes and tree tops, up in the realm of bird song, pause to drink in a new perspective.' 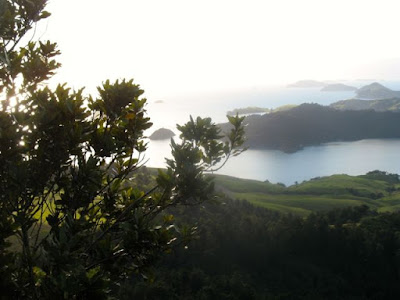 To descend from such a height is sometimes more challenging than to ascend. In my next post, I will tell you how the mountain guided me, and what I found. But for now, dear reader, we have climbed enough. Take a rest with me, and enjoy the view.
Posted by Juliet at 7:06 PM 7 comments: 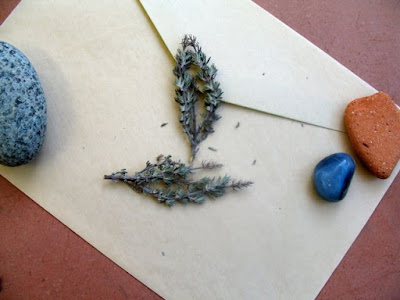 Just before I picked up my pen to write to you for winter solstice, I opened an envelope that had just arrived through the mail. Neatly folded inside the letter, I discovered two little sprigs of wild thyme.

Lost on the limestone
I inhaled the tangy scent and was suddenly tumbled back to the late sixties, when I was living in Paris. It was Easter, I was three months pregnant and we'd taken a train to the south of France for a holiday. Now we were wandering on a high limestone plateau known as the Calanques, searching for the Youth Hostel that would be our haven for the night.

Darkness was falling rapidly, the moon sailed high, and we were lost. I sat down on a rock to relieve the weight of the back-pack and rest my weary legs. That's when I was surprised by an unusual fragrance, penetrating the air: wild thyme, more pungent than anything my kitchen had known. It was everywhere, growing out of every crevice. 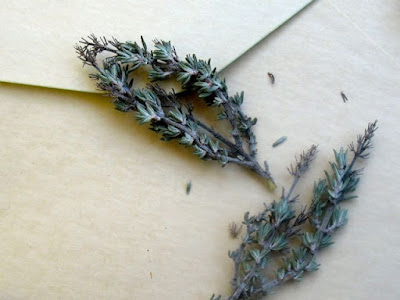 An injection of courage
Have you ever found that the smallest, most unexpected thing can charge you with courage when you are floundering? That's what the wild thyme did for me.

My friend is having medical treatment that requires her to draw on courage every day. Her gift reminded me of how connecting with my senses, beauty and wonder allowed me to refresh my brain, make sense of the map, agree on a route with my partner and find the way to the welcoming lights of the hostel.

Finding life in the dead of winter
At winter solstice on June 22 the sun's light will return. But how can you feel it when the days grow more chilly from now on? In winter, sensory awareness tends to contract. Autumn brings glorious richness and spring sweet fragrance, but winter sometimes seems like a bundle of dry sticks or soggy dead leaves. 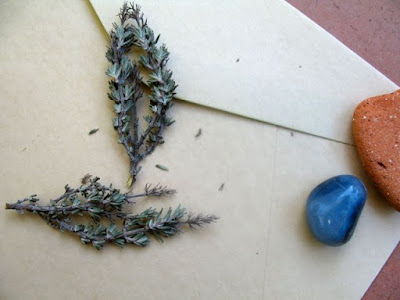 Dear blog readers, you've seen less of me here because I've been busy writing my Seasons Newsletter, which I now post on my website as a blog. Today I had the bright idea of copying the newsletter into my seasonal inspiration blog, hoping that you will enjoy it too.

You can read and post on my website blogs by clicking this link. (Scroll down to see earlier posts)

I'm also teaching online courses now, and this is keeping me busy. Below is a sample of what I'm doing:

The 'Winter Attunement' on June 23 is an opportunity for you to tune in — not just to the depths of winter, but to your own self. In the online meditation you will be guided to connect with the source of nourishment and wonder within. Following this there will be the time for drawing or writing so that you can express what you discovered.

My friend did the first winter attunement in 2014. She told me that the image she drew sustained her for months afterwards. Others reported feeling 'very relaxed, centred and nourished', and having something 'shift and ease inside'.

In the depth of winter, I finally learned that within me there lay an invincible summer. 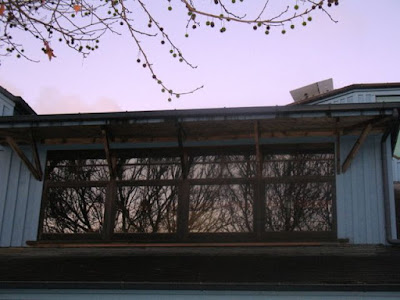 It is human nature to rebel against the encroachment of winter. At the Steiner School in the late afternoon, the rain cleared, and Darkness stepped coolly towards us. 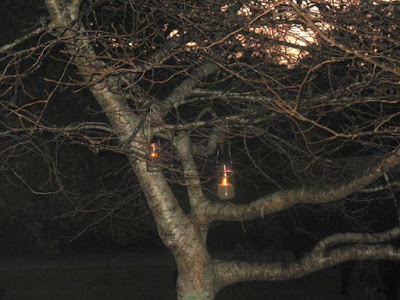 The air was alive with chirping children's voices. 'I know where he's gone,' said a young boy. 'He's gone to the bamboo forest.' Pranks were played, naughtiness frolicked amongst the trees, and all the time the lanterns began to appear. As Darkness threw her cloak over the end of day, more and more lights twinkled from the trees. 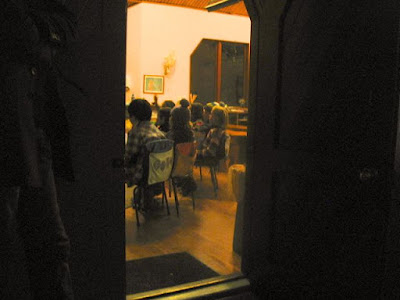 Then circles formed in the classrooms as the children were called inside. Their bellies were full and warm with tai chicken curry, dahl on rice, and hot tomato or buttercup soup. Our little one is in Class One, and we waited outside in the dark, wondering what would come next. 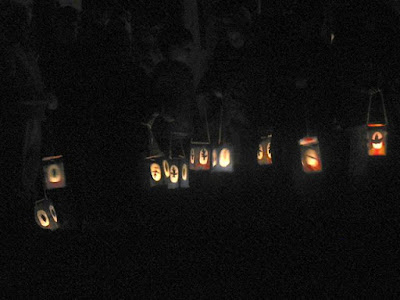 And then they began to emerge, little processions from each room. 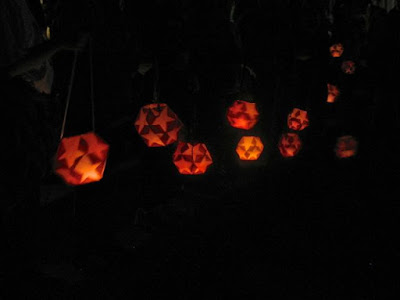 Each one had its own style of lantern, depending on the age of the children and what they could manage. 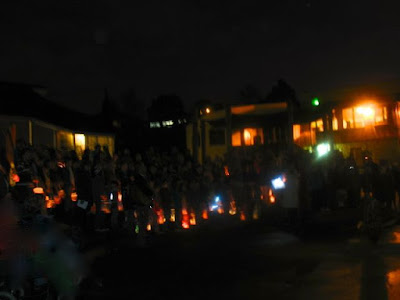 Gradually they formed their lines, until all the classes were gathered. Silence. Waiting. Then the bagpipes began to play. A violin followed.
After an invocation to Matariki (the Pleiades), which is soon to return and mark the Maori new year, the children began to sing - Maori, Scottish, English songs and rounds, ringing out beautifully in the shivering air. Music drifting over the cloak of Darkness, while lanterns blinked and winked—and my cheeks softened, wet with tears. 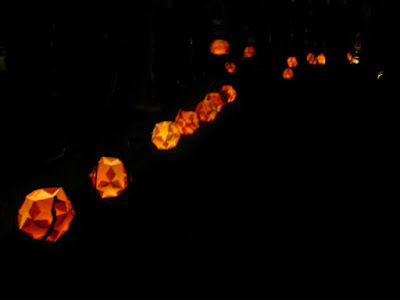 Time collapsed and rolled into a ball, in which centuries past and this very day here and now all folded around one another, and by the time the hooded senior pupils came on with their flaming torches to banish the darkness, I no longer knew which era I was born into. 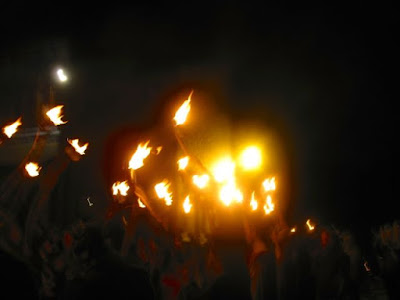 Asserting 'enough!' Turning the sun around. Banishing the dark of the dark. I tumble and roll back forty years or so, remembering these words of Thomas Hardy in 'The Return of the Native' as he described bonfires being lit on the hilltops of Wessex:

'. . . to light a fire is the instructive and resistant act of man [sic] when, at the winter ingress, the curfew is sounded throughout Nature.' 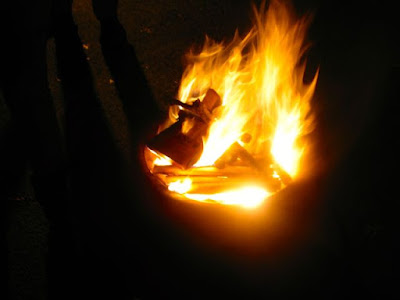 'It indicates a spontaneous Promethean rebelliousness against the fiat that this current season shall bring foul times, cold darkness, misery and death. 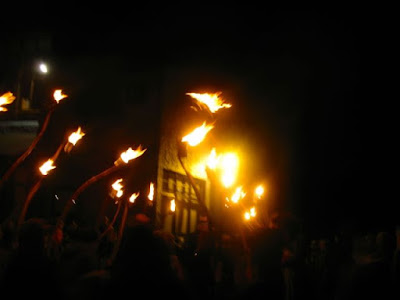 Black chaos comes, and the fettered gods of the earth say, Let there be light.' 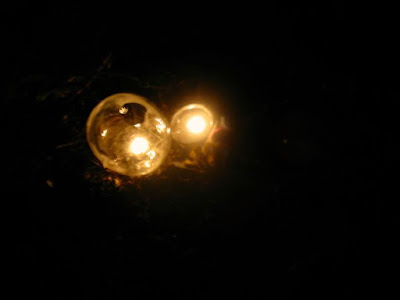 Time rolls around again, and I am a young child, returning to drink up a sense of wonder and ceremony that I didn't have at school. It is never too late to receive what was missing. And to rejoice that my granddaughter is having it all now.
Posted by Juliet at 8:49 PM 11 comments: