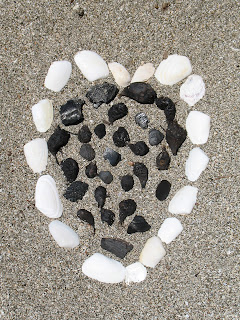 I journeyed to Waiheke today, to check out a venue for my summer retreat. There's something about crossing water that invites reflection, and carries me into another zone. On Waiheke I felt I'd left all cares behind and was on holiday — except for one thing, and that is my thoughts of the miners and their families from the Pike River Mine. Wherever I stop, I think of them.
On Palm Beach I made another small memorial, using black seaweed and charcoal. Both made me think of coal. And so here are 29 coal-black shapes, held within a shining heart of shells.
When I had finished, this sea gull stood as if in vigil. 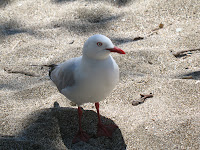 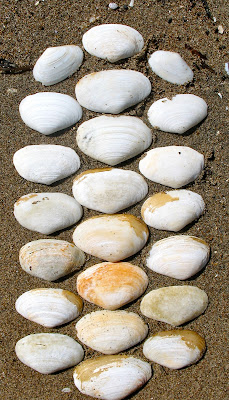 This afternoon at the local beach I played with what I found on the sand. It's so long since I did this, and I enjoyed warming up to what could be a season of beach play.

I worked quite unconsciously, not sure what I was doing, yet feeling it was about something.

Now when I look at the pieces, I think of the 29 miners who lost their lives last week in the South Island.

These pieces are my memorial to them. 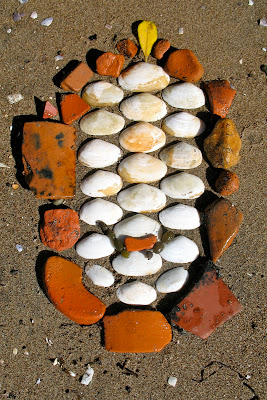 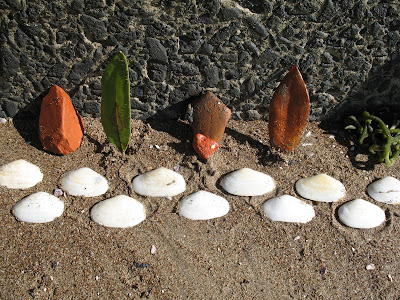 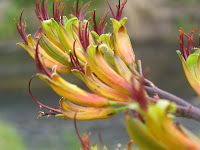 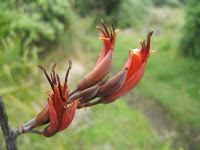 One of the pleasures of going out to the bach, is noticing what is happening in nature after a week's or fortnight's absence. This time, I'm aware of fragrance. On my walk I notice that the flax (harakeke) is in flower, both red and yellow varieties, licking the air and filled with sweet nectar. The Maori call it 'wai korari' and used to tap it out of the flowers and collect it in gourds. 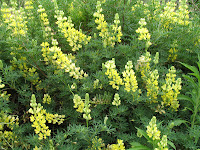 Along the coastline, lupin is flowering profusely, scenting the air with the promise of summer.

And in the garden, I'm thinking of scent also, as I plant a row of carrots. The shop didn't have any orange ones, only the Dutch white Heirloom carrots. The seeds have been grown and collected by the Koanga Institute, and I was assured that they would grow well and produce carrots that tasted just the same as the orange ones. I'm
doubtful: how can the taste be right if it doesn't look orange. 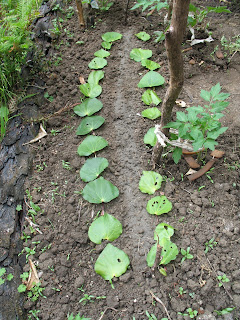 But I decided to give them a try. 'Plant them with chilli seeds,' advised the woman at the Health Food shop. 'That will deter the carrot fly.' I thought that maybe the white colour would deter the carrot fly, deceiving it into thinking they were turnips! But that's just me being silly. I know very well that it's the smell that counts.

Not having any chilli out at the bach, I decided to use kawakawa leaves. The Maori used to burn them to deter caterpillars from the kumara crop, and they have a peppery smell. Last year I laid them along the ground each time I thinned the carrots, and there was never a sign of disease.

I rather like the look of the row, lined with my favourite heart-shaped leaves. If I were a carrot fly, I'd smell pepper and keep right away.
Posted by Juliet at 5:45 PM 4 comments: 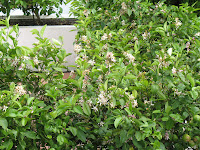 Summer is approaching, and the air is full of fragrance. The lemon grove below my balcony is in full flower, and as I sit at the outdoor table, the fragrance wafts up and around me, wrapping around like a silky chiffon shawl. 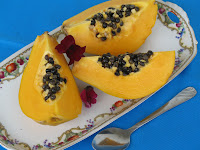 And here's the food: sweet papaya, melting in my mouth, seasoned with the mingle of lemon blossom. Oh sensuous season! - so demanding too, as the impact of approaching Christmas is making itself felt. These delights help me to relax and find ease.
Posted by Juliet at 11:56 AM No comments:

The possibility of summer 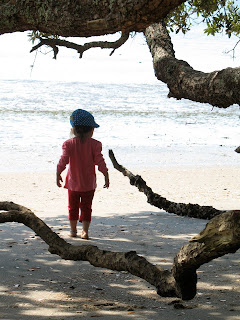 The cool breeze sent us back home eventually, but not before my granddaughter Mira (two and a half) and I had enjoyed exploring the beach for the first time since winter sent us scurrying inside.

The approach of summer is like the gradual opening of doors. Watching Mira taking in new experiences has the same effect. Through her eyes I see the freshness of the sea, the presence of the gnarled pohutukawa, and the wonder of sand filled with treasures. 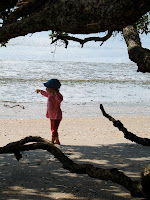 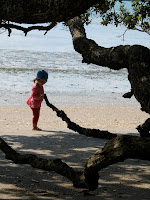 Spring in the bush 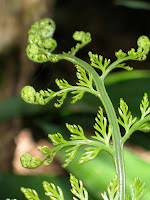 Out at the bach, I love wandering along the bush paths and observing what is springing into life.
The hen and chicken ferns are waving soft new tendrils, their stems stretching back like dancers paying homage to the morning sun. 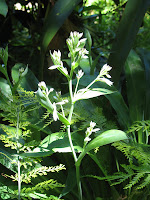 Then there are the renga rengas, perking up and putting out fresh white flowerlets. In the city, I wouldn't bother growing them because of the way they are attacked by snails, but out at the bach the land is snail-free. I planted a bare bank with renga rengas that were propogated by my friend Colleen on her bush block, and now they are spreading, flowering, and dropping seeds that quickly grow into good-sized plants. 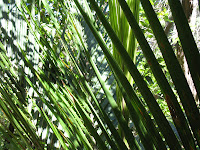 There are also the nikaus. A friend planted one, many years ago, but the others have all grown from seeds that have fallen in bird droppings - probably from keruru (wood pigeons), that love to feast on the orange berries.
I love the play of light and shade amongst the nikaus, and the basket-weaving patterns of their leaves. 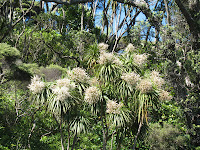 This year the cabbage trees ('ti') are flowering profusely. I enjoyed this group, tucked away in the bush, having a conference of flowering heads. The Maori always predict a long hot summer if the ti is abundant in its flowering. Who knows how it will be?
For now, the green and white life of the bush gives me all the pleasure I need. 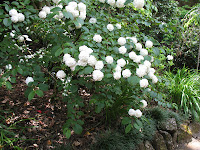 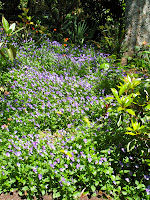 I wandered around winding rocky pathways in Eden Garden today with a friend. The garden was hewn out of an old quarry and has been developed over the years by faithful gardeners and volunteers. Dotted amongst the trees are plaques and benches commemorating those who have passed on.

I used to visit this garden frequently when I was living in Mt Eden and writing the chapter on Sanctuary for my book A Cup of Sunlight, about discovering the sacred in everyday life.

I was so happy to revisit, for I emerged feeling peaceful and soothed, just as I did in past years.

What is it about this place?

The refuge of shade after the heat and bustle of a warm spring day and driving through traffic?

The cool colour tones, and the way the plants have been allowed to flow freely over slopes and hollows?

Is it the atmosphere created by constant tending, and the tender touch of hands that lay down flower bunches from time to time beside the bronze plaques?

Is it the love that pervades every nook and cranny, every tree top and tiny plant? 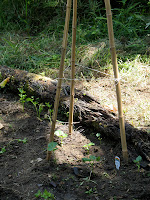 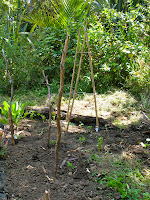 Here at the bach I've been planting my summer garden. What a pleasure it is to smell the good earth and feel the crumbly texture as my space turns the sods! I've chopped up the seaweed I brought home from the beach last time and have thrown organic sheep pellets into the holes before planting.
Now a cone of bamboo stakes stands ready, guarding a circle of pole-climbing bean seedlings. I've pushed manuka stakes deep into the ground, ready to support the tomato plants: Money-maker and Roma. The garden looks odd, and not particularly photogenic: just a piece of earth with stakes rising up at gawky angles, and the baby seedlings hardly visible. A row of dwarf bean seed lies hidden under the earth. But in my imagination the garden is filled with lusty plants that dwarf their supports and produce luscious produce.
Gardening is an act of hope. 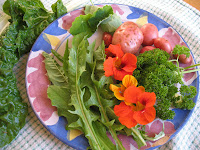 And to feed the hope, here is a plate of produce from previous efforts, all ready for dinner.
Posted by Juliet at 3:54 PM 4 comments: 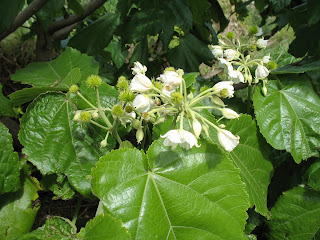 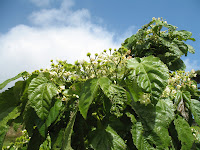 I enjoy watching the native trees and bushes flowering in their own quiet way. Many of our native flowers are pollinated by moths, and so their colour is white.
This is the whau plant (pronounced 'foe'), with leaves so lush that they look wet with greenness.
I used to live near one of Auckland's volcanic cones, called Maungawhau: the whau mountain (also known as Mt Eden). Alas, the whau that once covered this mountain had dwindled away, until a band of dedicated planters set to work propagating and replanting the slopes.
The wood is as light as balsa, and was used by the Maori to make floats for fishing nets. 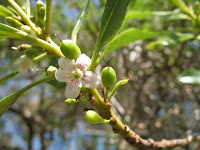 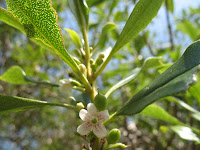 Also flowering now, quite shyly, is the ngaio tree. The photo below shows the tiny oil glands in the leaves. Maori would crush them to rub over their bodies as an insect repellant.
Posted by Juliet at 11:42 AM 1 comment: