Sail away, climb away 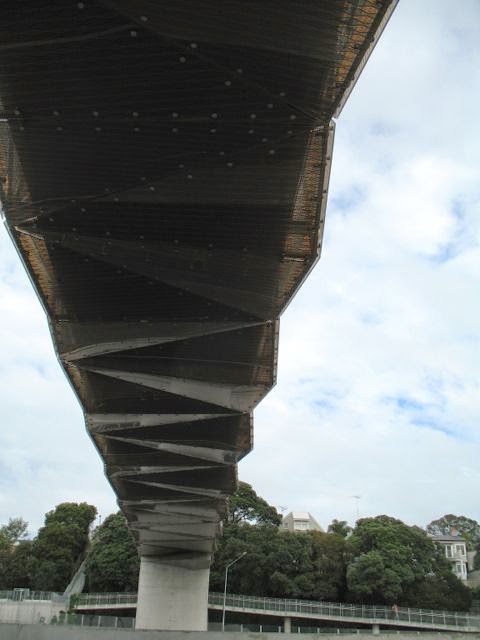 Does winter ever get you down? Do you get that shut-in feeling when the rain pelts down and the wind blows icy tendrils down your neck and into your ears? 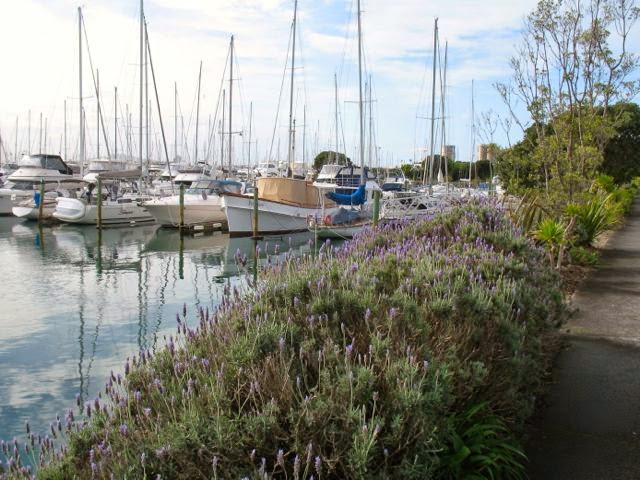 Then it's time for a winter walk. The sun is shining between showers and my friend wants to show me a new route. Instead of carrying straight on when we reach the marina, she shows me what happens when we take a right. 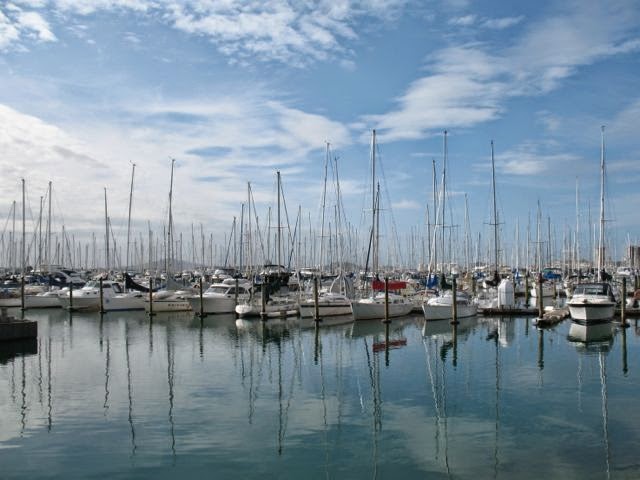 The sigh of so many yachts, peacefully moored, sets me dreaming of escape. When I met my son's father, we were at university. He owned two things: a Lambretta motor scooter and an Idlealong sailing dinghy, which he kept at this very marina. That was in the old days of course, before it became a haven for luxury yachts.
I can still remember the feeling of freedom rushing through me as we hoisted the sails and harnessed the wind, letting it take us wherever we wished (and sometimes where the wind wished). 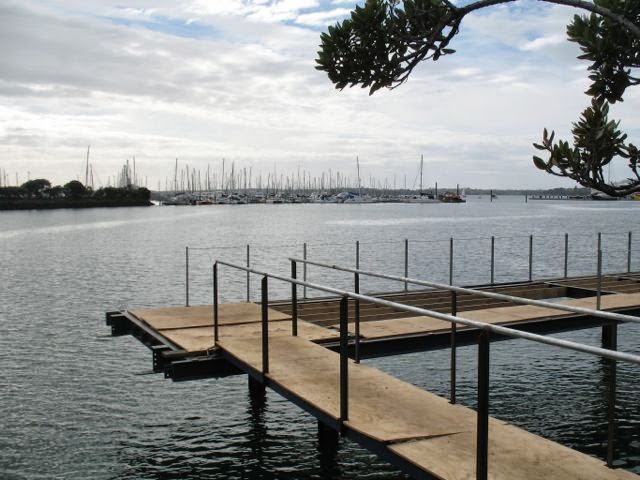 The Auckland Council is building a walkway to the city. Walking over water is the next best thing to walking on water, as dreams of sailing waft through me like summer clouds. 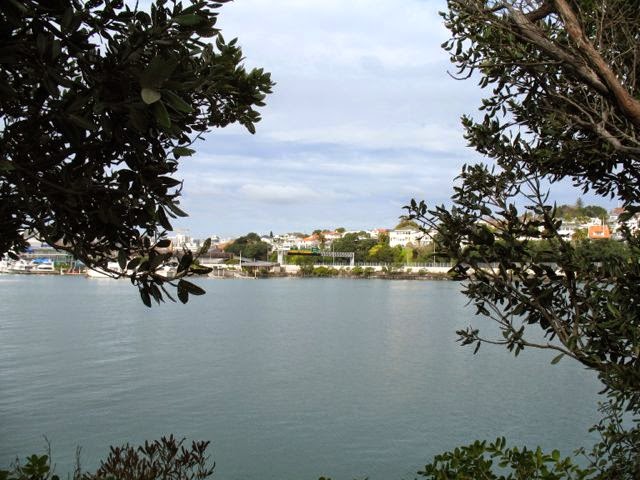 I could linger here, just listening to the clunk of halyards in the wind. But my friend has a climb in mind. This means skirting around the water to a distant point in the very middle of this photo. 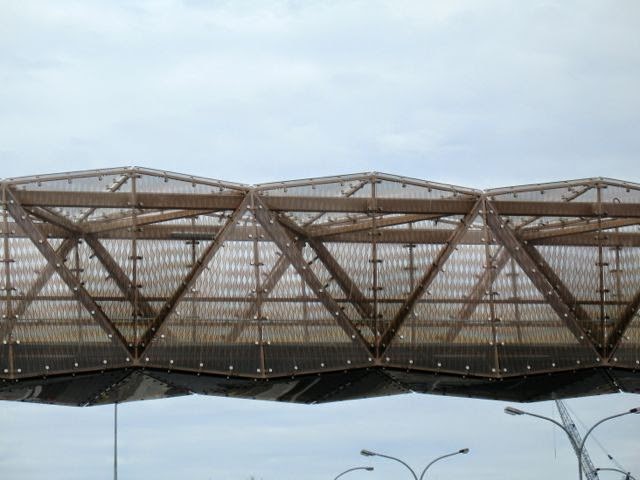 where we will walk on air and cross the sky. The walkway has been up for two years now, but I never knew it was there. At first I was not attracted. It looks ancient, as if constructed out of barbed wire. The brown colour is the result of an unfortunate choice, 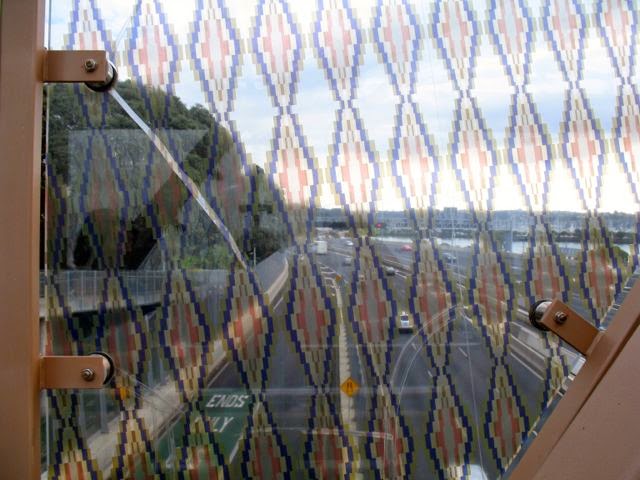 which probably seemed a good idea at the time. But these pretty lozenges in orange and green look old and rusty when viewed from the outside. 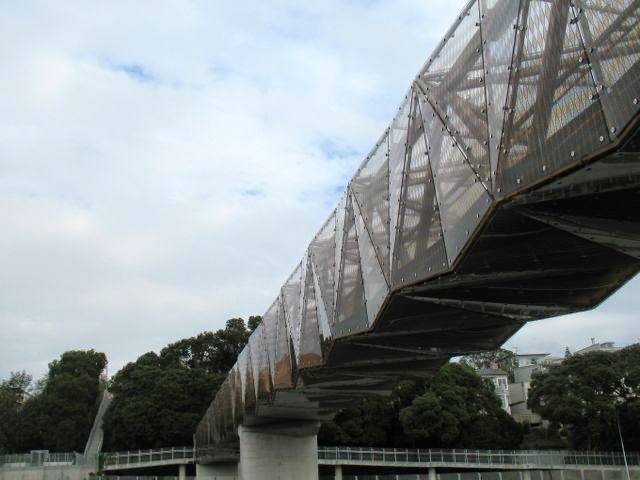 Time to climb. We make our way up a stairway before our walk on air, towards another stairway, which you can see across the motorway, on the left amid the trees. 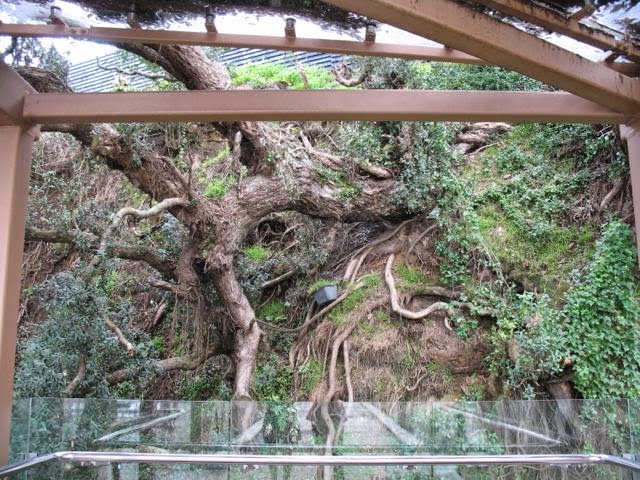 It was known as Jacob's Ladder in the past, for it was rickety and precarious, and clung to the cliff. Check it out in this link. (In naval terms, a Jacob's Ladder is portable, made of rope or metal, and used to board a ship.) 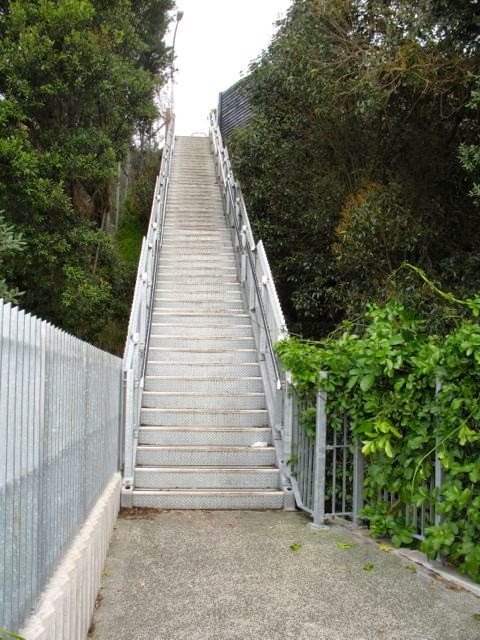 Now it shines. The name 'Jacob's Ladder' is originally biblical, referring to Jacobs vision of a ladder leading from earth to heaven. And so we climb away, into the sky, as I dream of flying into the heavens of new life. 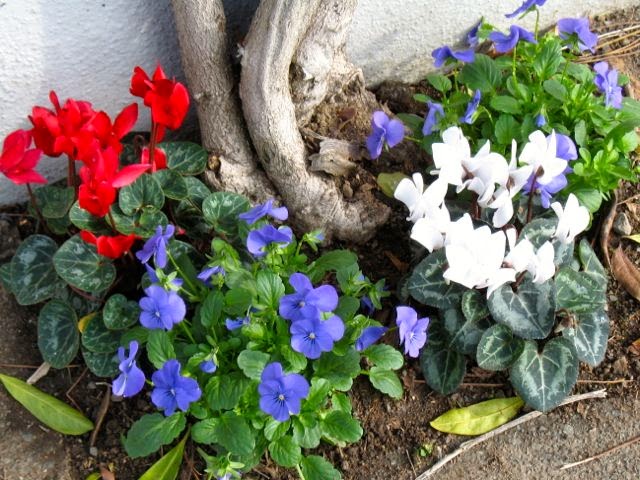 Spring is still a wet cold month away, at least. But at least we can find little glimpses of cheeriness along the way, and in the free realm of the imagination, escape by sea or sky.
Posted by Juliet at 1:56 PM

What a lovely walk. I am intrigued by the design of the walkway across the motorway.

My uncle used to have a yacht on Auckland harbour and he'd take us sailing on 'Wild Cherry'. The wind can certainly pick up quickly. I'm not keen on winter but it's certainly more tolerable if the sun is shining xx

A whole new meaning to Jacob's Ladder and a whole new definition. I know of the Biblical reference, but, did not know of the nautical one. I'll be thinking of you, walking on water, Juliet, as I water my garden later. One of the plants in it is called Jacob's Ladder.

I love his seagoing, very seasonal post. Thank you.

*Gallivanta, it feels very safe walking across the motorway in this tube.

* Charlie, how lovely that you have sailing memories here as well. 'Wild Cherry' sounds a romantic name for a yacht.

* Penny, my sculptor friend is making a Jacob's Ladder for the Navy Museum, and bringing in all the references. It's a big project. I didn't know there was a plant called Jacob's Ladder. Nice to think of you watering your garden and thinking of me walking on water! What connections we keep finding, across the world.

Thank you Gallivanta, Charlie and Penny. I appreciate your comments.

How wonderful to have a walk like this - a little bit like the 'air' walks you find in the tops of trees. They give you a different perspective on things. Definitely a must for our next trip to Auckland. So much has changed in the marina area - how wonderful those days were when you could just sail anywhere in the harbour. I remember my short sailing days when I was at college in Bournemouth and sailing in the Solent. My best memory was hanging off the side with a fierce wind blowing and being in a race. Exhilarating times! I loved the photos in this post and particularly the serenity of the marina with its lovely reflections.

* Anne, how nice to have you visit! We will be able to walk right through to the Wynyard Quarter on the new walkway. I'd love to do an air walk in tree tops; must find one. I sailed in the Solent too in a big yacht once.
Hanging off the side in a small boat is exhilarating indeed! Thank you.

Now is the coldest time in your part of the world Juliet. Love the photos of water, yachts,violas and cyclamens growing under the tree. Spring will be soon!

Nadezha, today is very stormy and wild, and many people have their power cut off. The surprise sight of spring flowers was encouraging though. Thank you.

I detest winter. Detest it! But your winter is like our spring here. Lovely!

Linda, I don't think our winter is anything like as extreme as yours. Thanks for visiting.

Hi Juliet - don't you wish your winter away .... it means our summer disappears too!!!

But what an amazing project that walkway is .. and how fabulous to be near enough to reach it and walk along some of it ... I see what you mean by the choice of fabric ... pity - about the rusty look ... still walking on water, flying over it and then Jacob's Ladder to return to 'normality' ..

Lovely part of the world and thanks for sharing your photos .. cheers Hilary

Hilary, I'll do my best not to wish winter away! You certainly had a lot of it and won't be keen to see it again. The walkway adventure was great fun, and as I looked out to the harbour bridge I thought of your grandfather. Thanks for visiting.