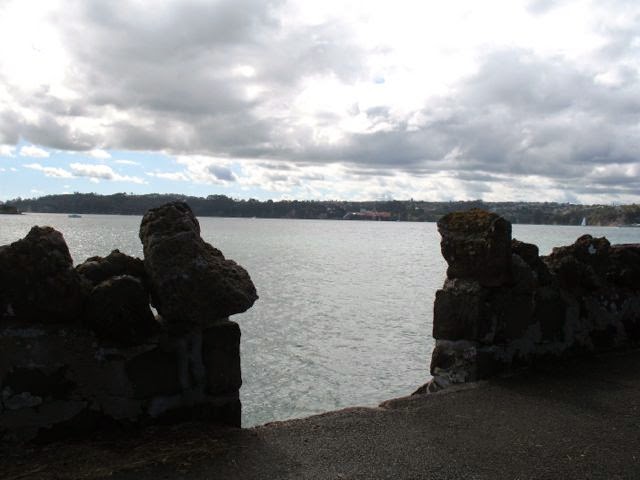 The shadow falls in any season, even in spring when nature is singing its heart out and growth is surging everywhere. 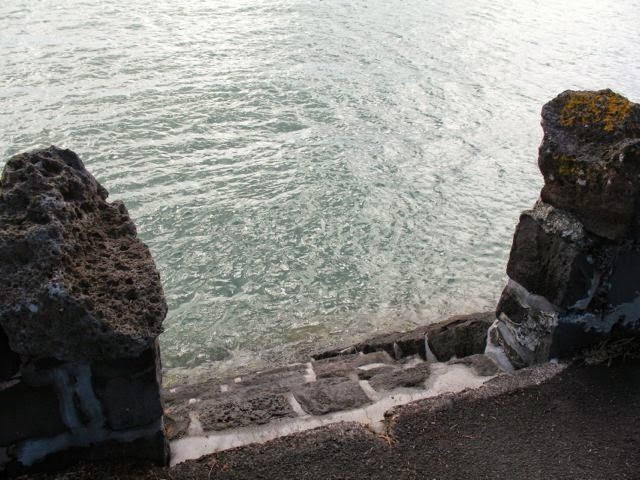 There is no one season for making a crossing out of this life. As I walked along the waterfront near my city home, I contemplated the passing of a beloved elder of Te Henga. 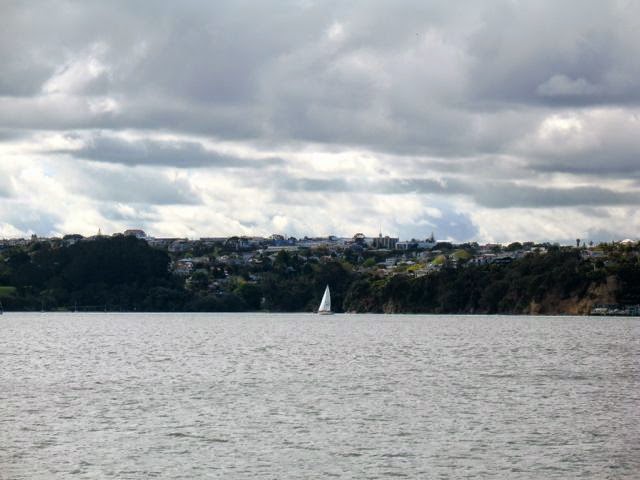 I thought of her soul, sailing onwards after a long life of hard work and generous giving. We first met when I returned home from Paris with a broken heart to bring up my two-year-old son in the area that she also called home. She gave me loving support through those years of solo parenting.

What I didn't know until my last visit to her, was that we shared roots in Taranaki, where she also grew up. Her father, the magistrate in New Plymouth, was friends with my grandfather, who was the policeman in Inglewood. They both held a vision of restorative justice, long before this term was coined. They wanted to rehabilitate the young, and not to punish them in a way that secured their future as criminals. 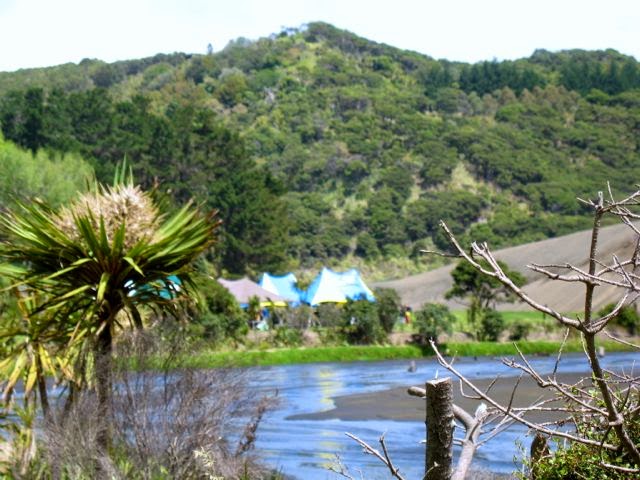 Her funeral was held, fittingly, beside the river and the sand hills that she loved so much, and alongside the home where she and her husband raised six children. Over many weeks they took my son into their home and gave him the experience of being part of a large and loving family while I travelled overseas. Such acts of kindness are never forgotten.
Hundreds came to the funeral, bearing their own tales of what they had received from this woman of gentle strength.
This was not a day for taking photos, and my attempt is out of focus. 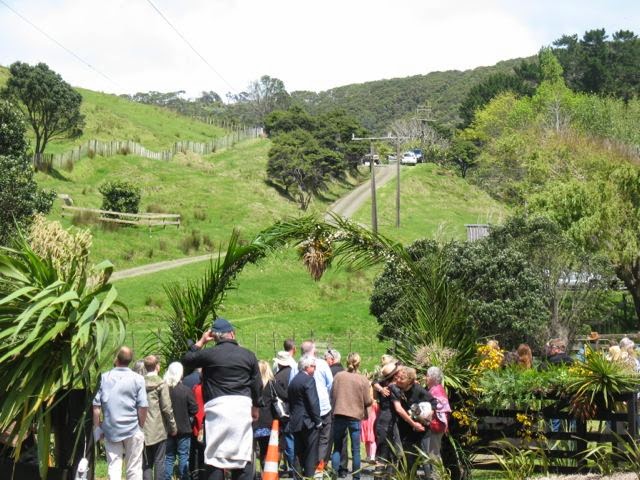 At the funeral I learned about other, more deeply intertwined roots: of her family with the Maori tribe of this area: Te Kawerau a Maki. Their connection went back several generations, to when her ancestor 'Pa' Bethell first came to the west coast and began to farm. Members of the family were dandled on the knees of tohunga and taught to chant karakia (prayers) when they were little children. 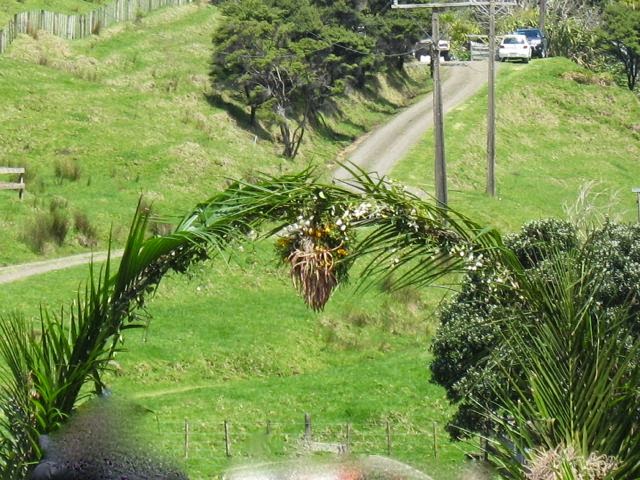 Gusts of wind shook the marquees, songs were sung and a karakia was resoundingly chanted by Te Warena Taua, Chair of Te Kawerau Iwi Tribal Authority.
Te Warena generously supported me when I was writing 'Celebrating the Southern Seasons' in the early 1990s. He made the Auckland Museum archives available and helped me to find many old books that yielded their secrets of Maori seasonal observances. We greeted one another warmly, united in grief.

In 'Celebrating the Southern Seasons' I wrote of a vision of bicultural healing: 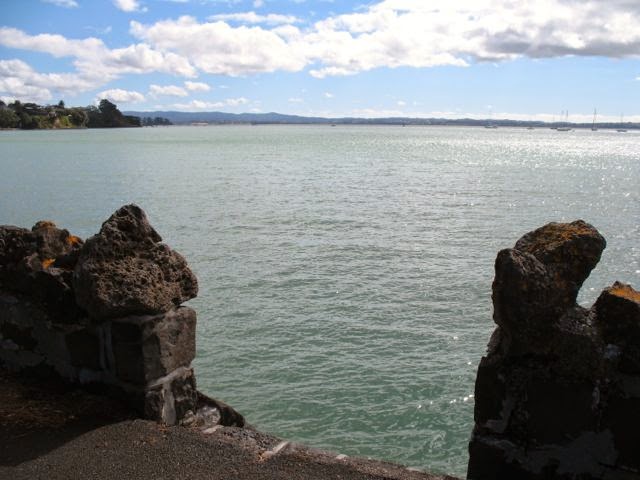 A rousing haka by a group of young Maori men broke out as the land rover slowly drove away with the coffin. Tears ran down my cheeks as I made my way back home. My heart was also full of hope: that out of deep roots of love and respect, flourishing through the generations, different peoples can live together in harmony.
R.I.P. Elizabeth Alice Wheeler (Ibby)

Hi Juliet - wonderful post to someone who very obviously influenced many, and who was revered in her environment.

Lovely description of the service for Elizabeth Alice Wheeler ... no wonder you were sad ... this will stir memories for you for a while yet.

With thoughts - the shadows protect the young .... Hilary

Hilary, her influence was widespread. Thank you for your comments.

I am so sorry to learn of this shadow that has passed over you, Juliet. The loss of such a longtime and generous friend and spirit is difficult, but, you carry through her messages of life and your own, with that wonderful spirit you possess. Blessings and thoughts are coming to you from sphere, Juliet.

Like you, I am forever grateful to wonderful generous women like Elizabeth. Such sadness, yet, as you say, such hope. They showed us pathways and gateways.

* Gallivanta, these people really stand out. A life well lived affects so many others. Thank you.
* Penny, thank you too. As you know, I responded on the wordpress site.

When people of such character die they leave a large hole. I am not sure that their like is made nowadays.

I am sorry you lost an important friend.

Friko, I'm feeling the loss. She certainly embodied good values, and she has also passed them on to her children.

That's so sad. I'm so sorry to hear this. It sounds like she was honoured greatly in her farewell. Elizabeth sounds like such a loving and kind person and how very good of her to reach out to you when you were a single mum with a young son. I love how she included your son as part of her family. He must have loved having those extra 'brothers and sisters'. I'm not sure if I've told you but my grandmother grew up in Taranaki and her brother was a writer and he wrote a book about growing up there called 'Springtime in Taranki' xx

Charlie, she was a wonderful and supportive person. I'm fascinated to hear that you grandmother grew up in Taranaki. Recently someone told me about the book 'Springtime in Taranaki' and I read it with great interest. Do remind me of the authors name and I might be able to find out how I heard about it.

I'm so sorry about your loss. Your memories enriched me as I know they did you.

Thank you Linda. Richness and loss, together as you say.

How beautiful -- your telling gave me chills.

I am sorry for your los What a beautiful tribute to an important person in your life and what a lot of coincidences I love the shared vision of restorative justice. I believe in that strongly as well.
Also what a beautiful place alongside he river to say goodbye.
I wish you all the best and lots of love

Marja, it was a powerful event, and it was so good to find out about the shared vision of restorative justice. Thank you.