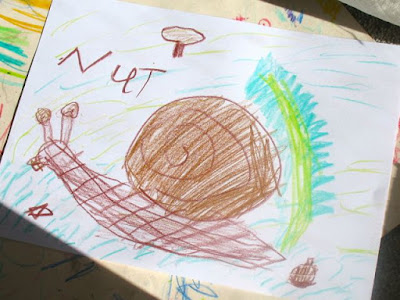 The wail could be heard throughout the house, bouncing off the walls and bare wooden floors. 'My snail!'  Through the sobs she choked out, 'It's gone!'

This happened last Thursday when I was visiting the family for dinner. Oh dear. When I arrived, she hadn't yet returned from her Playdate. I'd spotted a little box with leaves and shells in it, beautifully arranged, and thought it was one of her little homes for the fairies. But no.

On the threshold between six and seven years old, the little one has graduated to wild pets. Before leaving to play she had left the box on the floor with a picture on top to act as a lid. 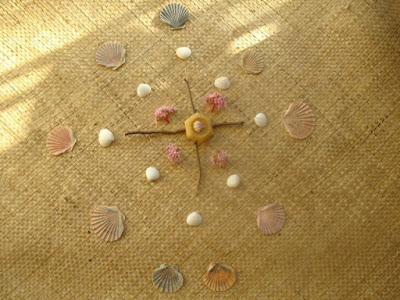 That would have been fine last July, when she was the only child. But now she has a very active little sister, who is crawling everywhere and exploring everything. There was no lid on the box when I came in, and I thought nothing of it when I found something squishy in little sister's mouth. I removed the dark soft object and placed it on the mantle piece.

It wasn't until the little one came home and let out her wail, that I realised what the squishy object was. Oh dear, it's tough when your little sister tries to eat your pet. 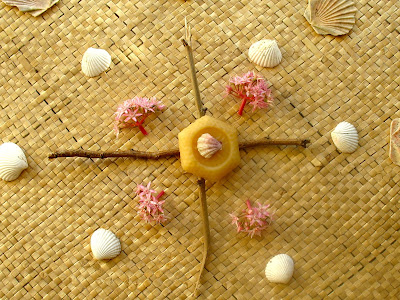 I have been at war with snails for many years. They attack my tender lettuce seedlings and destroy whole plantings in a night. But one snail, singled out for love and care, how can I be at war with that? I cradled the little one in my arms, and said I had a special story to tell when she came to visit on the weekend. 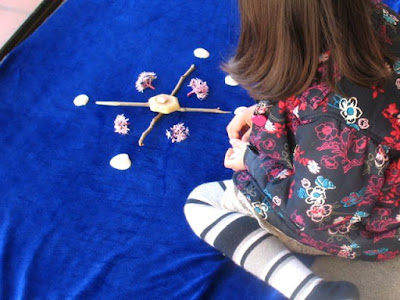 Making mandalas is soothing. Sometimes we draw mandalas, but the morning after the sleepover, she wanted to use shells, flowers and sticks. Her sharp eyes had noticed a little arrangement I'd been making on my desk, and she was inspired to create something for herself. 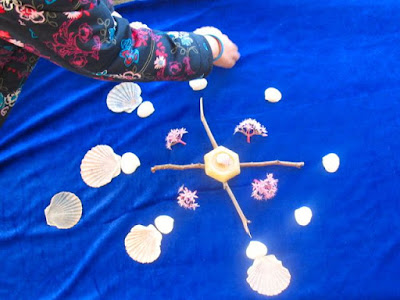 She had slept peacefully, for in the evening I read to her from the special story, written by a person who would have understood her upset.
You may know Elisabeth Tova Bailey's book, 'The Sound of a Wild Snail Eating', or have seen the video [click on the left of the page] of her snail slowly moving over a bed of moss.

We learned that snails are nocturnal, that they have 2,640 tiny teeth, and that they are very fond of mushrooms. 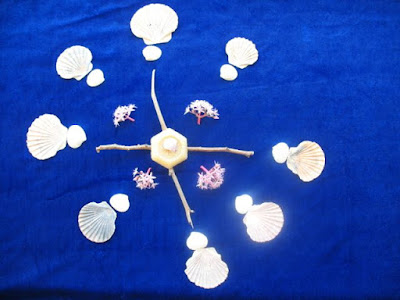 We found out how the companionship of a wild snail helped a woman with a serious chronic illness, and we learned how when life slows down, new wonders of the natural world may be revealed.

The little one found a new snail under a rock after Thursday night's little tragedy.
Elisabeth Tova Bailey decided not to name her snail. It's hard, she said, to name a creature that is a hermaphrodite. She simply called it 'the snail.'
The little one had already named her new snail. 'Nut' seemed to me a perfect name to describe a little brown shelled creature. 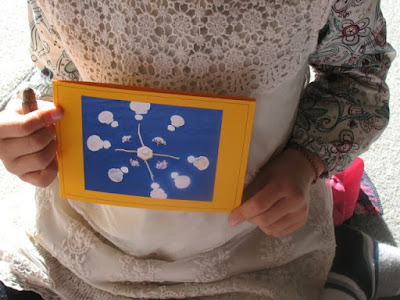 The mandala has been photographed, printed out and pasted on to a card. Tears are forgotten. We are fascinated to learn more about snails and the wild world they inhabit. What was nothing but a pest to me has now become a creature to study.

All the same, I hope it doesn't copy the author's wild snail, and hatch 118 babies.

As Mira is learning from you, so too are you learning from her. How beautiful this all is, Juliet; well, except for the baby eating the snail. I had to chuckle a bit for Kezzie's little brother has done similar dining.
As always, I learn so much from your postings, and want to learn more.

Oh Penny, so you'd had the same issue! Yes, Mira and I are learning from each other. I'm sure you know how that works, with your little ones teaching you so much. Thank you Penny.

Oh dear! What a story. I can just imagine how upset she would have been after building her new best friend a perfectly adequate home, only to find he flew the coup. I hope he didn't end up under someone's foot as that would have been a double tragedy! I had no idea snails had so many teeth, nor that they are nocturnal. You learn something every day! xx

Charlie, it was quite a tragedy at the time. Keeping pets means lots of tears for children, as I'm sure you know. The teeth are all arranged in a kind of ribbon, that keeps renewing itself. The book is well worth a read.

It was her best friend and she lost it, I understand. But a little sister didn't know this.. What a problem. You did very well telling story about a snail, Juliet. To say the truth I hate snails, they eat my veggies :((

Nadezda gardeners are certainly not keen on snails. I'm glad you enjoyed the story, thank you.

Such a lovely post! But I laughed out load at the picture of you removing the squishy object from the little one's mouth, all unknowing . . .

Vicki, it was quite a moment when I realised what that object was!

Hi Juliet .. I don't think I ate a snail, or did anyone else that I know of .. til much later in life ... with some good old garlic butter sauce and delicious hunks of bread - then they are delicious!! I did offer the family manure cakes though ....

Mira and the little one - such a delightful (with a bit of yuck) story! Fun and it's lovely the interaction you get with them ... cheers Hilary

Hilary, how nice to hear from you. I haven't received any notifications of your posts, then thought, I'd better check anyway so this is a good prompt. I did actually eat snails when living in Paris - but a very different variety. Better for kids to play in the muck than be too sanitised - better for the immune system too, it seems.

I love how you write Juliet. It's like being a fly on the wall watching it all unfold. I really like the idea of photographing the mandala and making it into a card to mark the times. Filing that idea away! Much love to you. x

Anissa, what a lovely comment. Thank you, and I can just imagine you and your creative young one making mandalas too.