King tide, and I took more than a plunge 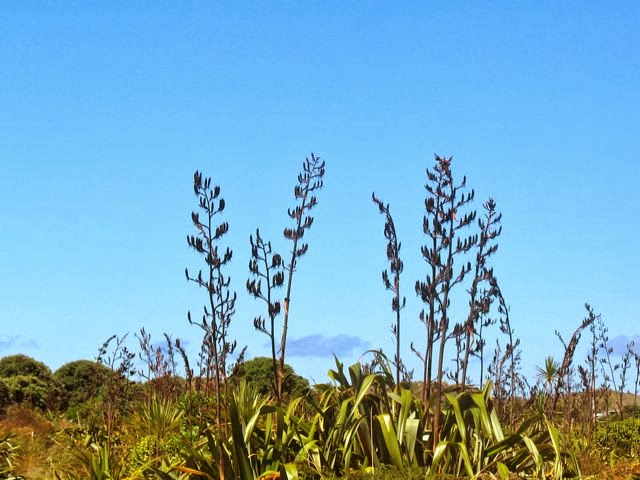 Today, out at the west coast, the day was looking promising. As far as the flax is concerned, summer is well advanced, enough to ripen the seed heads and lift them into the sky. They don't care about the rainy windy episodes that have marked this season. 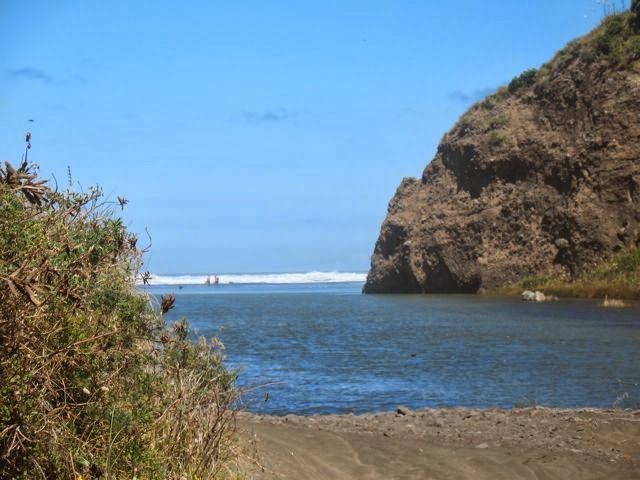 As I came round a bend in the track, towards the beach, I noticed something unusual. The lagoon was blue. And it looked bigger. 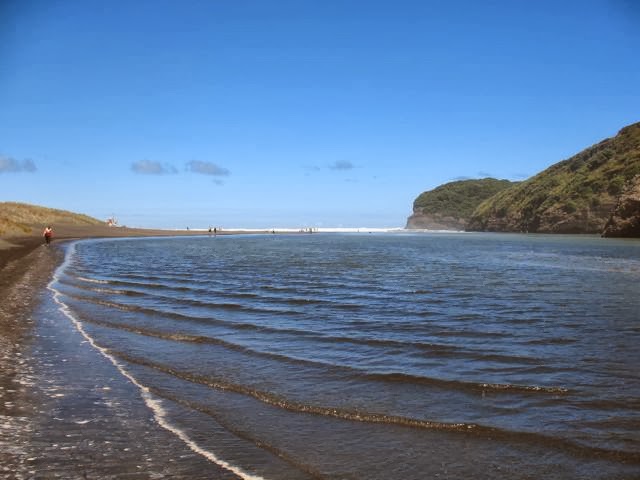 I walked a little further and saw that it had spread the full width of the approach to the beach. This is most unusual. Then I saw a sign announcing a King Tide. 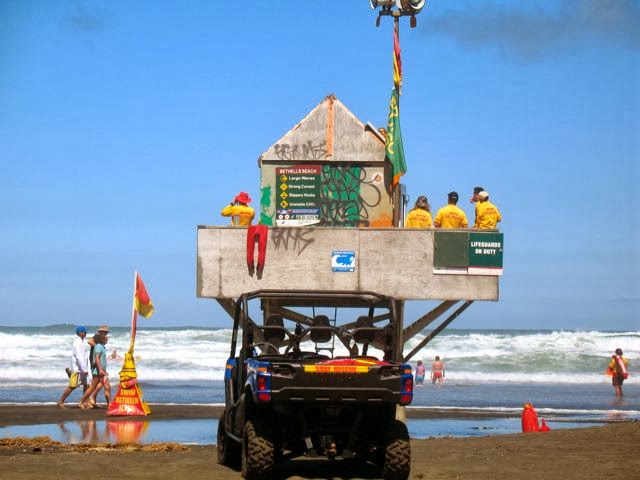 The surf life savers were out in force, for this beach can be dangerous and the rip was pulling strongly today. Most of them are volunteers, fit and plucky teenagers who have saved many a swimmer on the west coast beaches. Encouraged by their watchful presence, I decided to brave the waves and take my first swim of the summer. 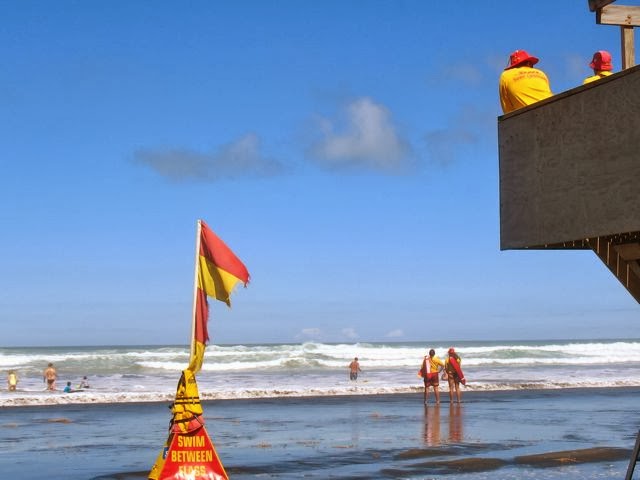 As I stood knee high in the cool water, I had second thoughts. 'This is an early December temperature,' I said to myself. 'It's not an-end-of-January-come-along-in' sort of day at all.
That's when I saw it: a big wave bouncing high and rushing towards me. Then I saw the second one, just on its shoulder. And then the third, lifting its head up to get a good view. Now had I been poised with my boogie board, and turned in the other direction, a triple would have been just what I'd been waiting for, patiently, and I'd be all ready for a ride.

But I was just a reluctant, out-of practice swimmer, caught unawares. The next thing I knew I was tumbling over backwards, bouncing against the sand then up and over in the boiling surf. I stood up shakily, knowing that I'd just had my first swim (or was it that my first swim had me?) And it wasn't so bad.
I waved to the two young life guards who were standing at the water's edge, to let them know that I didn't need rescuing, then took another plunge, and another.
Dear reader, I was refreshed, through and through! And invigorated. And proud. 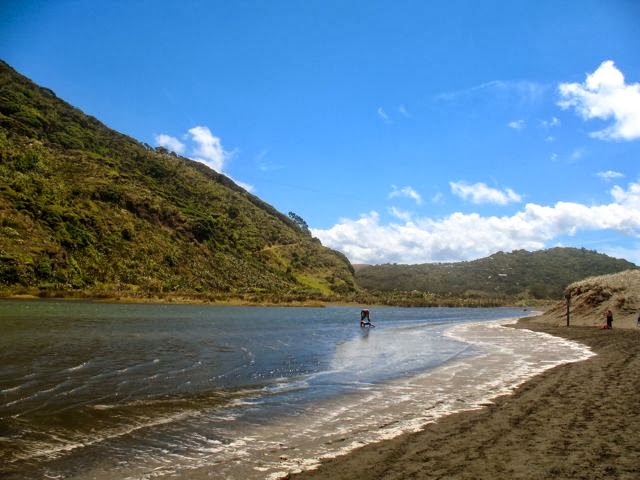 As I walked back along the foaming edge of the lagoon I could feel a surfy feeling tingling inside me from my toes to my ears. Although the wind was a bit cool, I felt warm enough. The  happy feeling of summer having arrived was bubbling in my veins. 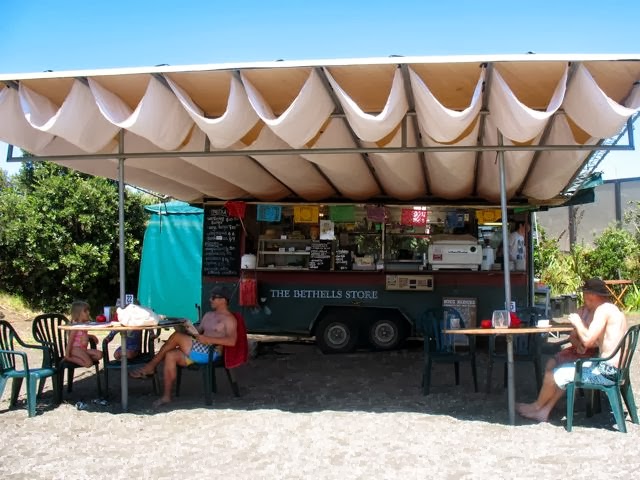 At the beach cafe, I discovered a new item on the menu: gluten-free blueberry muffins. Usually I avert my head when I see a menu of things I can't eat, but today I had a treat. As I sat in the shade, eating my muffin that arrived with a slice of orange and a dollop of yoghurt, I felt there was nothing more I could wish for.
Do you ever have a day like this, when everything you've been waiting for rolls up, all in one day?Today I had a summer holiday — and it was perfect.
Posted by Juliet at 2:14 PM

Sounds perfect. Not so sure about being dumped by the sea! That's because it happened to me as a child, and I thought I was going to drown. I was a good swimmer too so it was a shock to be so out of control. Your experience was certainly refreshing. Did you know Auckland City has a king tide project and are asking for images for record purposes?

I'm waiting for the loving feeling....we have 5 inches of snow here.

It sounds like a most perfect day, Juliet! How I love the sound of the words "a surfy feeling tingling inside me from my toes to my ears". Indeed, a perfect sort of day, which, I am sorry to say has been claimed by me lately, but, one which I have had - and I look forward to when next one rolls my way.

* Gallivanta, that must have been frightening when you were a child and got dumped. Thanks for telling e about the king tide project. I hadn't heard of it, and will check it out.

* Linda, what a contrast: your snow and our surf. Hang in there, your time will come.

* Penny, I hope a perfect day rolls in for you before too long. I'm sure your kitchen is producing much in the way of comfort meanwhile.

Thank you Gallivanta, Linda and Penny: so nice to have your visit.

Good on you for going in and getting dumped and loving every minute of it. It looks like a very special part of the world and it sure looks like summer has arrived. I hope the water temperature warms up for you xx

* Charlie, it was fun. As you've found with your holidays, we don't always have perfect comfort but a good location makes up for a lot. I hope it warms up too, thanks.

Hi Juliet - the sea is a dangerous animal .. and those tides are frightening at times. Wonderful to see the life-guards out in force .. but more important that you had that wonderful swim and exuberant dunking ...

Hilary, it was more dangerous than I realised. A mother drowned on that same tide further north, rescuing her children, and a whole family was swept away somewhere else - luckily they were saved.