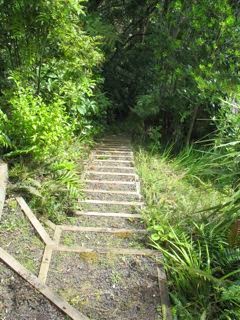 There are 72 steps from the carport to the bach. Must have been too much for the three wise men of Christmas, because I didn't catch a glimpse of them. The path way was covered with weeds, and overgrowth was encroaching from the sides, so that might have been an extra deterrent.
But two strong men were there - my son, and his friend from India, whose family is across the other side of the world. The friend came to stay at the bach last Christmas when he was newly separated and having a hard time. It was a pleasure to make room for a guest around the table, and this year when returned,(much happier) he felt like family. Yesterday, on new year's day, the two strong men returned. They wanted to begin the year by saying thank you to the bach. They knew that, what with setbacks like a broken wrist, I hadn't been able to keep up with the maintenance this year. So they'd come to help. That's why the steps in the photo at the top can now be seen, and why this pathway along the downstairs room looks so neat. 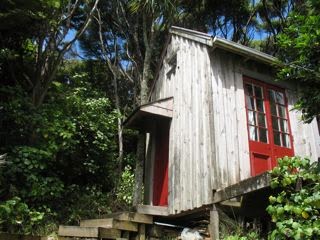 And why the little cabin above the bach can be seen (rather than the jungle that stood in front of it, 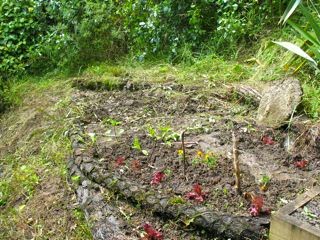 and why the garden, which was a wilderness of broad beans, with long grass all around, now has edges again, with the broad beans all dug in, and the new plants able to see the light. And why we had a fine meal last night, which I cooked for them in gratitude, with a big dish of broad beans straight from the garden. 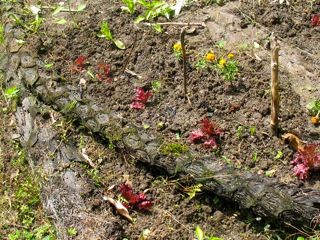 Giving and receiving. Last Christmas was the time for giving. This year has begun with receiving. The wheels of life keep turning and bringing exactly what is needed, making this a happy new year already. And I hope it is for all of you, dear blog readers.

PS A big thank you to Hilary, who prompted me to change to pop-up comments, which makes things easier if you are on certain servers. So if you haven't commented before, please give it a go. I love to know you are out there, and that my posts have 'landed', wherever you are.
Posted by Juliet at 4:21 PM

They are not only the two strong man but also the two wise man. Great job. The bach is gorgeous.
Wish you a very happy New year

Hi Marja - I like what you say; they are indeed two wise men! The bach is a wonderful sanctuary.

Now that the family excitement of late December has settled a bit I hope to be back to commenting and blogging.

I loved your Keruru post and I really enjoy your bach posts.

Men can really make a huge difference when elbow grease and muscle power is needed. Lovely festive season gift for you Juliet.

Wonderful to have two youngsters around to help - sounds like a relaxing useful convivial time ..

Good luck with this coming year .. but what is a bach? Presumably a term for a holiday cottage? I must say a few days there with some books would be just wonderful ..

What a wonderfully beautiful post, Juliet, in so many ways. To give - and to receive, graciously, as you have. All part of the circles of life.

I love it when we have a visitor at any holiday table. A friend of the girls', or ours, with nowhere else to be. Someone in transition, such as your son's friend. Someone from a culture other than one's own. This year, our niece and her family brought their menorah to light along with our Christmas dinner. It was a small thing to encourage them to bring it, but, a big thing for their little family to share with all their Christian relatives. My gift was the smile on the boys' faces.

What a wonderful start to the new year. May it be a specially happy one with much giving and receiving.

And it's MUCH easier to make comments. Thanks to you and Hilary.

What a nice little cluster of comments I've discovered this morning!
Lynley, glad to have you back again, & glad you are enjoying the bach posts & the kereru.

Hilary, a bach is a NZ term for a holiday cottage - originally from 'bachelor's residence'. Your suggestion about pop up comments is certainly helping people - thanks Ruth for letting me know.

Penny, yes a visitor at the table adds so much, and extends our sense of family. How beautiful to have your niece bring the menorah.

how wonderful juliet! and i have very much enjoyed this wee peek into your beach bach world. what a blessed corner it is

It is, full of blessings, Anissa.