What the Empress dropped (2) 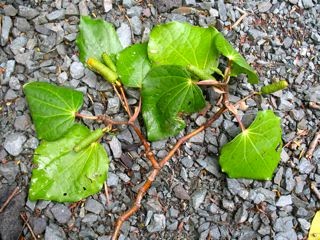 I noticed that Madame Kereru dropped something else, each time she visited. Yes, she tears off a whole bunch of kawakawa in the course of her feeding, and drops it on the ground.
You could say that she's an untidy eater.
But there's more to it than this, perhaps.
In Maori tradition, it is often said that the forest birds shared berries with the kiore, the little Polynesian rat. 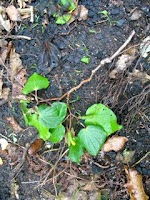 It is said, for example, that when miro berries were ripe, the kiore refrained from tree-climbing, for this was also the time when the birds fed on the miro. The kiore would stay on the ground, eating the berries that fell down while the birds fed in the trees above.


And so - is the Empress simply following an old tradition by leaving some for the kiore?
And does she know that the kiore is now pretty much extinct on the mainland, and has been replaced by the larger and much less friendly Norwegian rat?
I guess not (sigh). 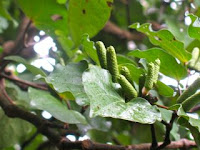 But do not accuse her of being an untidy eater. She is an altruistic empress, and likes to share her food.
Posted by Juliet at 5:10 PM

A beautiful bird the empress is. I never heard of her before. NZ has many interesting birds. I love the little story Let's not tell her about that the kiore is gone and I am used a bit to untidy I've got two teenagers

I'm new here, Juliet, via Marja's blog and from Australia. You write about this beautiful bird with the majesty and awe it deserves. I look forward to reading more.

Hi, thanks Marja. The kereru (wood pigeon) is a much loved native bird.
Elisabeth, nice to have you visit, and thank you for your kind comments.

Such an interesting follow-up on the empress and her habits. Squirrels sometimes do this here with similar bits about in early spring. One creature helping out another, whether or not one is now extinct. Lovely.

Penny, it's nice to think of your squirrels doing the same. It's amazing the way nature's ecosystems have become so beautifully calibrated, isn't it?

No Keruru in my garden but a blackbird fledgling was chirruping at dusk tonight for a final feed for the day.

Hi Lynley, yes she is special indeed, and blackbirds are a delight too.