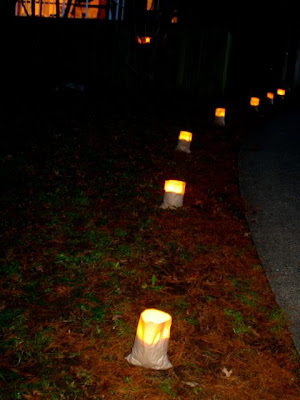 Tonight I was invited to the Steiner School, where the kindergarten pupils had been preparing all week for the annual Lantern Festival.  I was a little puzzled by the timing, since our Halloween has passed and winter solstice is a month away, but evidently the Lantern Festival commemorates St Martin, and a French story about him giving his cape to a poor man who was cold.
Paper bag lanterns lined the pathway, 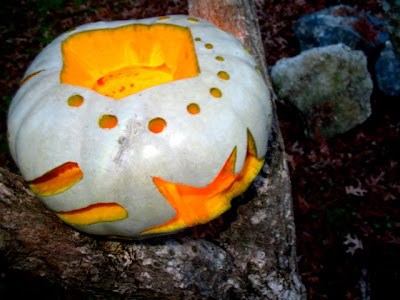 and hanging from the trees were pumpkin lanterns. This one was helped by a drill for fancy decorations. 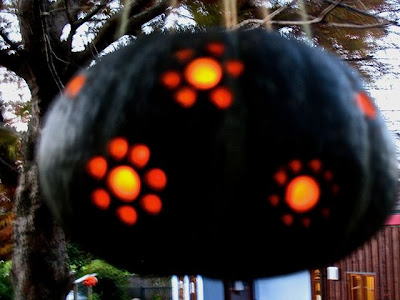 And maybe this one as well. 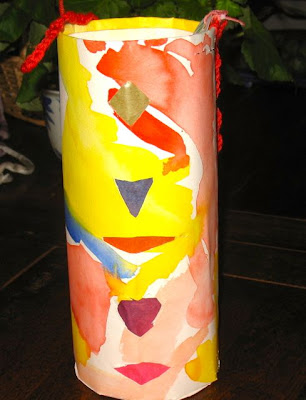 Each child had painted a piece of heavy paper during the week. The paper was then rolled into a tube, stapled and given a heavy cardboard bottom. Little windows were cut out of the sides and transparent paper glued on, so that the total effect once the candle at the bottom had been lit with a long gas lighter, 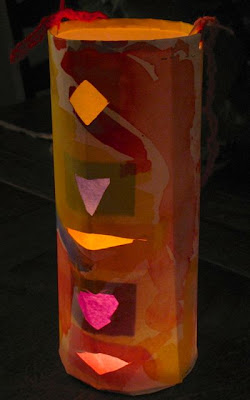 was really beautiful. Each child had made their own handle, using finger knitting to make the cord.

We gathered in the kindergarten and heard a story of how a lantern was born. Then each lantern was carefully lit, and flanked by parents/grandparents, each child stepped out into the dark night and walked in procession along paths, up and down steps, and around corners. 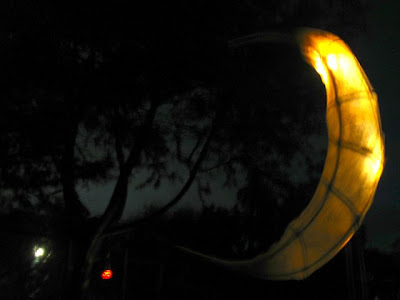 A large crescent moon lantern smiled on the procession of smaller lanterns. Overhead, a silver full moon shone upon us all. Mysterious music — guitar and violins — sounded from different locations as we walked (played by a parent and some children). 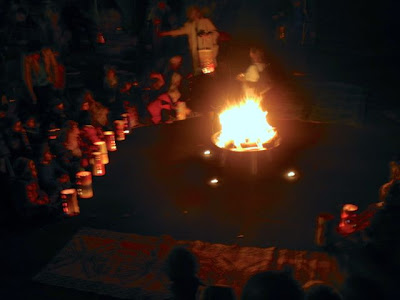 Finally we gathered around the bonfire, and sang songs while big dishes of roast kumara and other warming food were passed around. 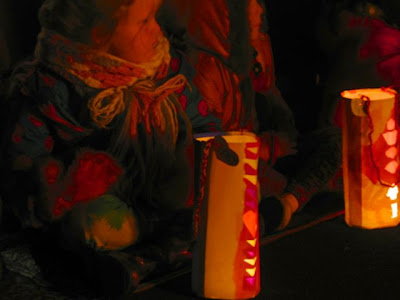 The children were so sweet, totally absorbed in the magic of what they had created. I could feel that universal feeling of being safe in community that comes when we gather around a fire at night. I felt rich in blessings, and like a little child again myself, immersed in the wonder of life.

PS If you'd like to view a beautiful video about a Lantern Festival in England, click here.http://vimeo.com/53616672

Hi Juliet - I loved seeing this ... just beautiful, serene, happy and loving .. so beautiful in its thought and story telling - the children will remember for many a day.

Hilary, it was so special, and all the things you say. Yes, I think the children will always remember such a special night.

There is something magical about the glow of lanterns at night; moving carefully along paths by the children that made them, music, surrounded by loved ones. It is good to know that such festivals continue to be celebrated. Thank you, Juliet. Katy and crew will be arriving late tonight. I think I put out some candles to light their way.

On the first anniversary of my Dad's passing my mom & I had a ceremony and we tried to release Chinese lanterns in the air - not as easy as it looks. They fell to the ground and caught alight (no damage) Luckily, it lightened the mood and we both just laughed and it was also a special night for us.

Penny, the combination of darkness and moving patches of light is enchanting. What a lovely thought to put out candles to light the way for your family, and what a treat to have them visit you! You must be so excited. Have a wonderful time.
Thank you.

Judy, what a touching story about the Chinese lanterns.
Thank you.

That sounds like a lovely evening and the lanterns are so pretty. (Except I did think the crescent moon was a banana but perhaps I'm just hungry!) xx

Charlie, it was very special - and I can see just what you mean about the crescent moon looking like a banana. Of course, being a foodie, I guess it's not surprising that you would see something to eat there!
Thanks, great to have you visit.

Steiner School would of been where would of sent our kids if we hadn't homeschooled. Wonderful learning for the children. Bet you did enjoy celebrating with the children.

*I was impressed with the sense of community, and wondered how homeschooled children get that. I had a wonderful time celebrating with the children, thanks.

I particularly like the last photo of the children so entranced by the occasion. It almost looks like a painting.

Lynley, you are right. I think of the Dutch old masters.
Thank you.

Got here!
Lovely story Juliet... which Steiner school, the one at Laingholm or the one at Ellerslie?

Valerie, congratulations! Thank you for persisting. It was the Ellerslie school, where my granddaughter now attends the kindergarten.