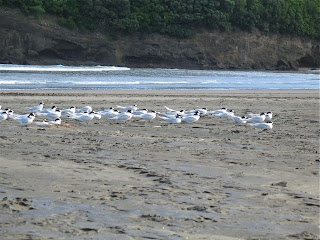 'They're not seagulls', I said, as we sat on the beach during the finest day of the Easter weekend. 'I think they might be terns.' I was right.
When I could check my bird books and the web, I learned that these dainty birds were black-fronted terns, known to Maori as tarapiroe. They are also known as 'sea swallows', because of their forked tails. Tarapiroe breed in the shingle rivers of the south island, but move north in late summer and autumn, gathering to feed around river mouths. 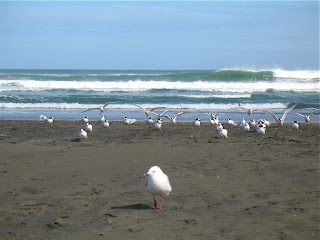 Startled by passersby, the whole flock flew in the air as if it were a single entity. It wheeled around, making elegant patterns that I was too slow to catch with my camera. But here they are coming into land. 'They are definitely not gulls,' I said. 'Gulls are competitive, each for its own, but these birds act in unison.' The gull in the foreground was unperturbed, intent on finding out if we had food scraps. 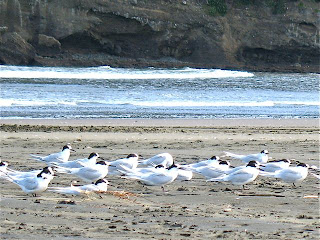 Terns are rare visitors to this beach, and their graceful presence felt like an Easter blessing.
Posted by Juliet at 1:52 PM

Their flight must have been beautiful to behold. I don't know that I've ever seen a tern and it is such a thrill to see your pictures.