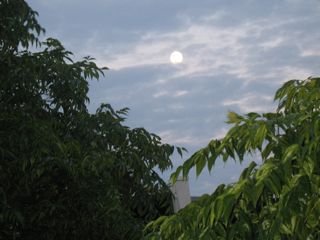 Fullness is gathering, as summer solstice approaches. Three signs of abundance presented themselves to me today: the swelling moon, the melia trees which frame it, and are now in full leaf, 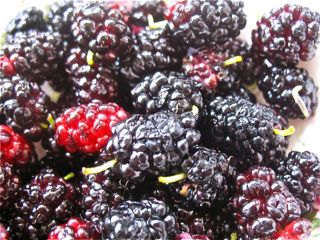 and mulberries, a gift from my friends' garden. I've sung 'Here we go round the mulberry bush' so many times, but had never seen one till now. These sweet berries were left over after the wax eyes and blackbirds had eaten their fill.
Last night when the moon was full, there was a total eclipse, visible from Auckland at 3.32 am - well supposedly, but the sky was thick with cloud.

And so, as I eat mulberries one by one, I reflect on the cycles of life: moon waxing and waning, shining and eclipsing; the melia that was bare through winter, then flowering, and now leafy and full, and the berries that have appeared so quickly in my friend's fertile garden; the little child that I once was, listening to nursery rhymes, and the grandmother that I now am, passing them on as I sing them in turn.
Posted by Juliet at 11:45 AM

Very beautiful post Juliet; I love your childhood memories and that you are now passing on the stories and rhymes to your grandchildren.
I remember seeing a mulberry bush in London, I felt as though I should sing and dance around it.

Thanks for visiting, Marilyn. You too will soon be passing on stories and rhymes to your little one also. I like the idea of a mulberry bush in London.

Wonderful summerinesses! I have never eaten mulberries. How wonderful Juliet. I have not sung 'rounds' for such a long time either. I feel in a strange space about the season.. with Christmas here and family overseas. I just want to celebrate summer. You help me make sense of it! Thank you!

Joan, I'm glad to be part of bringing you into our summer. Travelling certainly disrupts the seasons for me, and it takes a while to reorient. Great to have you back!

How beautifully you have brought the season, Juliet, and the seasons of life around.

We have mulberries here as well. The birds eat them. So do the deer, rearing up on their hind legs to pull the branches down and strip them of the berries. It is quite something to observe. We take what we can. Tom likes them on cereal, actually, and a bit of ice cream is delectable as well, but, the best is warm and out of hand.

Penny, I can just imagine you competing with the birds AND the deer for these delicious berries. My friend just has the birds to contend with. Those deer of yours are certainly tenacious.

No mulberries here but what a beautiful post! We picked our first cherries today, and have been enjoying thick with sugar snap peas. And the full moon has been a wonderful prelude at the start of this week.

Picking cherries sounds special, and sugar snap peas are so tasty. Nice to hear of fullness in Christchurch. Thanks for visiting, Ruth.